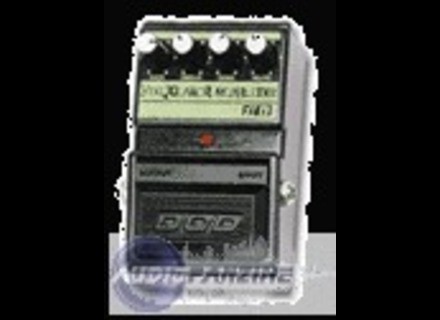 The FX13 Gonkulator was a ring modulator designed for use with electric guitar. Its circuit combines DOD's Grunge distortion in parallel with a ring modulator (center frequency = 500 Hz). It is well-known as the effect heard in the song "Glass" by Incubus, and for having perhaps the least-intuitive control names of any DOD effects pedal. Two cosmetic variants were made, with the second (more rare?) version featuring the "real" control names above the knobs. The FX13 Gonkulator debuted at Winter NAMM 1996, and remained in production until about 1997. Because of its limited production and subsequent popularity among noise artists, the FX13 now routinely sells for over $100 in the used marketplace.

DOD FX13 Gonkulator Ring Modulator
5
The DOD FX13 Gonkulator Ring Modulator is a very unique pedal, even in the world of ring modulation.  The pedal is analog based with pretty standard characteristics, including a 1/4 inch input and output and a nine volt battery compartment.  I believe the pedal can also be powered with a nine volt power supply, but I've only powered it up with a battery.  This isn't rack mountable as it is a foot pedal.

Using the DOD FX13 Gonkulator Ring Modulator isn't hard, but getting used to what each parameter does isn't as easy as you'd like.  The pedal is really designed for users who are unfamiliar with ring modulation and the parameters that come along with it, as it substitutes each with a different name.  While this did throw me off a bit, I would imagine that some less experienced users might find this a little less confusing, though at the same time the names that it gives the parameters aren't any less unrecognizable.  From left to right, the pedal has knobs for 'suck', 'smear', 'gunk', and 'heave',  all parameter names that I've never seen on anything else and don't expect to.  However, once I was able to play with the pedal a bit I was able to see what each parameter does, although I couldn't pin point each one and match it up with its traditional ring modulator name.  I've never seen the manual, but I'd definitely recommend checking it out if you're at all confused.

The DOD FX13 Gonkulator Ring Modulator is definitely a bonafide ring modulator with all the bells and whistles that you would want from one.  I'm assuming that if you're looking at this review, you know a bit about ring modulation, and know that it is certainly the most far out effects processor you can get.  The sound of this pedal is warm in nature and definitely has a lot of versatility between the four obscurely named parameters.  I've used the pedal with a Fender Strat and a '76 Fender Twin Reverb, so I got a pretty good idea of what the pedal truly sounds like, although I do believe that the pedal would work well within just about any set up.

I haven't seen too many DOD FX13s out there for sale, but they do show up on eBay.  The price of these pedals varies a good deal, as some people hold these high in regard while some don't.  As far as getting a good ring modulator goes, this is still probably one of the cheapest ways to do so.  Of course it doesn't hold a candle to the Moog Ring Modulator, but if you're looking for a simpler pedal with a good tone quality that will get you the basic ring mod sounds and then some, the FX13 will do the job for sure.