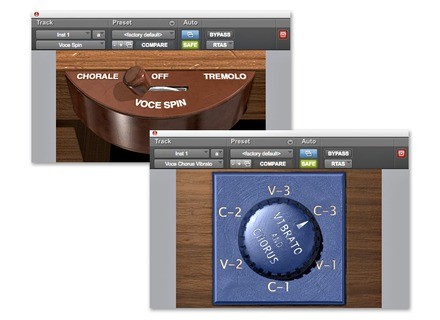 Bomb Factory Voce Bundle
4
The Bomb Factory Voce Bundle is a set of two plug-ins that is brought to you by Digidesign, who is now only under the parent name Avid. The two plug-ins that are found in this mini bundle are the Voce Spin plug-in, which is a Leslie type effect, and the second one is the Voce Chorus/Vibrato. Installing the bundle should be quick and painless, and you should be able to get the plug-in running very quickly granted that you have a compatible system. The interface on both of the plug-ins is really simple, as there isn't much to either of them. The Voce Spin is just two different preset effects, while the Voce Chorus/Vibrato has three preset chorus effects and three preset vibrato effects. A manual isn't necessary at all for using these plug-ins.

Right now I'm running the Bomb Factory Voce Bundle in Pro Tools LE 8. I run Pro Tools on a Mac Book Pro that has a 2.2 Ghz Intel Core 2 Duo processor and 4 GB of RAM. I run Pro Tools LE 8 with a Digi 002R audio interface or a Digidesign Micro Box depending on where I'm working from. I can't say that I've ever had a problem running these plug-ins, as they take up a very very small amount of processing power. It's also worth noting that I've used these plug-ins on an HD system without hassle as well, which of course isn't surprising. I've been running these plug-ins on my system at home for a few years now...

The Bomb Factory Voce Bundle plug-ins are definitely cool to have around, but they are also limited in their ability since they are basically a series of presets and don't have much to work with in terms of control settings. That said, I do use these whenever I'm looking for a quick chorus, vibrato, or Leslie sound, and most of the time the presets sound great. These are cheap enough where you can't expect them to be crazy in depth, but a little more control would be nice. Besides that, these are some great little plug-ins as I'm a big fan of these types of effects!
Did you find this review helpful?yesno
»

Published on 07/22/12
Avid has announced that Voce Bundle and Tel-Ray Variable Delay are now available for AAX DSP and AAX Native.