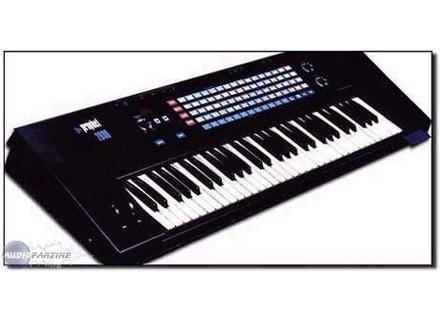 All user reviews for the Sequential Circuits Prophet 2000

Average Score:4.0(4/5 based on 1 review)
Value For Money : Excellent
Not satisfied with those reviews?
Our members also liked:

It was an instant success, which moves very quickly between the cheapest Ensoniq Mirage was released in 1984 (also successful for about $ 1500) and other more expensive systems like the EMU Emulator II and Synclavier.

12 presets in the machine are all samples of a Prophet-5, but it is possible to crush everything and obviously add yours.

The English manual is a sacred pavement, but clear enough with many examples, there is also a lighter manual that explains a little French bases.

The LCD screen is a simple 2-digit display, unfortunately a bit small which makes editing not always easy, but if there are a few marks on the machine to help you.

Use is made by flexible membrane keys, not easy at the beginning but there are also notable publishers patch on Mac and Windows, which greatly facilitates the use MIDI, I would say almost indispensable
I suggest you also see the excellent page Patroche about P2000 (see Tip for more info).

The MIDI implementation is well ahead of its time with the multitimbral midi4 he accepts and sends all MIDI data on each channel.

There are many improvements such as increasing memory 256k to 2MB or more outputs.
You can also order Disk original samples which are also compatible for Prophet 2002 SCI Studio 440 and Oberheim DPX-1.
More than 200 samples disks are still available with big tubes organs, pianos, effects and all the great keyboards of the time as the Minimoog, Rhodes, ARP, PPG, and my favorite OB8 the Oberheim Matrix 12 obviously the Prophet 5, but also others such as the Yamaha DX7, Roland D50, JX10, Korg DW etc.. etc..

Just note that some disks are 256k and 512k other, then check out your machine to make sure you have a good memory before ordering.
More information at: http://www.winecountrysequential.com/

You can also replace the floppy drive by HxC emulator with an SD card reader.

Filters based Cem chips are really impressive, the real plus of this machine.
It immediately gives a true color and heats the sample color of embers.

Good sampler with analog filters that warm well any samples.
But less for keys membranes, and the LCD too small for my taste, but the build quality overall is very good, it is also built like a tank, and does its weight.
All the rumors about his so-called reliability as can be for the first all models, but are unfounded for others. As the owner of two of them that work for nearly almost 30 years (see photos), I will obviously difficult to convince.