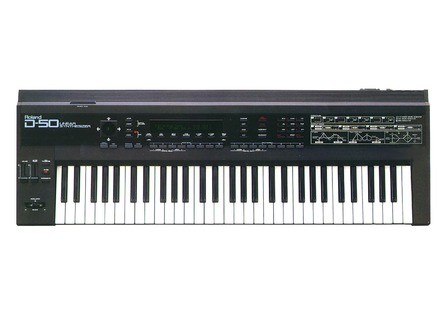 davardennes's review (This content has been automatically translated from French)" Legendary!"

Roland D-50
5
Everything has already been said, but hey, I'll do his portrait for fun lol!
Roland D50 ==> still buried some legendary bike by its "warmth and grain" synth!
clear:
THE synthesis (or "Linear Arithmetic" - forms of PCM samples mixed with analog wave).
Year of manufacture 1987
Keyboard 5 octave velocity sensitive and aftertouch, pitch bend a wheel also used for modulation.
16 voice polyphony, 4 part (Each patch consists of two tones, "Upper" and "Lower", each of which is itself composed of two partial).
64 presets + 64 presets card (optional)
Chorus + reverb effects, and a small joystick that allows change the value of parameters and also playing on the balance between the two voices each and every one of their partial.
It has connectors Midi In / Out / Thru, two stereo outputs (one for each voice), a headphone jack as well as sustain pedal and expression.

Manuel found on the net, easy to use, but against for editing is a different story! LA is a study in itself, there are fortunately some tutorials on the net, but I'm always looking for a good book that I have to say will help me.
Once the principle of LA + - + even if you want to ease editing your sounds, you can still find PG1000 (midi controller D50 and D550) but sold at prices ridiculously high, so point D50 owners finally ended up turning to PC-based editing programs, which is not to the advantage of those who offer for sale and thought PG1000 hold "the" treasure of the century! !
(I've seen some ads PG1000-old + 1 year, and the price tends to go down a little in some)! personal if I wanted to "really" a PG1000, maybe I will put 150 view € 200 but not more! Thank you for computing down to earth a few feet olibrius!
FYI, the Peavey PC1600 also control noon D50 honorably.

Well that sounds old, keep a certain charm to the nostalgic ("Fantasia", "Soundtrack", "Pizzagogo" or "Digital Native Dance", employees and re-re-re-employed by the artists of the time) However I think the D50 could have some fun young people who want to discover LA
Hargh yes the keyboard is a bit tired after decades (for the velocity of 0-100 but it will, but you can go from 100 to 127 deal with the club or jumping foot attached above)! against by the synth sounds great and expresses its potential when it is driven from a good master keyboard. I use it for a Cakewalk A800 Pro which has been modified (slightly weighted) and it is more sensitive to the aftertouch, and there is a real treat!

I've had + - 1 year, I always dreamed to have one.
some of its sounds are classic, others are a little squeaker, but when we go to edit is automatically another world!

I had a JD800 that has cast me (nothing like you tell me ..), but I much prefer the D50 it a inimitable grain and retains a certain charm despite age are! On the other hand it is a synth that has influenced a generation and who will delight nostalgic old teens! Some on an old classic car in their garage, me it is a D50 in my room, I, j'le guard j'le not sell lol!

Roland D-50
5
hello roland d-50 did nothing wrong!
it is perfect FUNCTIONING
purchased in 1989 til this day it is super
no breath-no misery quelquonque
knob and the two are glisier nikel
twelve o'clock the decision not to play as jack
and the display panel no worries either

very simple meme without pg1000 not need this thing

If you are like me, ie purchased new in 1989 is a time 15000ff
good advice to KEEP & warm with a small blanket for
Protects from dust, mine is the inpécable as if I had bought
yesterday

5 of 13 people found this review helpful

Roland D-50
2
5 octave keyboard for a enjoyable, which makes a nice master MIDI keyboard. The joystick does not fail at Roland call, there is a small look of Darth Vader and buttons that cliqutent, panting, waiting for your programming. The D50 is a classic, one of those keyboards you love or Mythic dtest, but everyone heard adj. The effects are zero, on the other hand ... The polyphony is 16 voices, synthse called LA (Linear Arithmetic As). There are 64 sounds in RAM, plus the same thing on a map slide in bte.

Pretty crappy program, I must admit! The LCD is a bit small, menus and submenus often sotriques: there must be time ... And instructions to beginners.

One day I got tired of my old D50, and I sold it. I am not crooked philosophy LA, but I agree that those who say that this is wonderful synthtiseur must be right ...

5 of 12 people found this review helpful

Nonolepiano's review (This content has been automatically translated from French)

Pretty simple once acquired the spirit of the machine

Huge, not quite a JD-800 trs but really well, I do not want more work!
No acoustic sounds, synths that sound, tablecloths ...

I have since 1996
Gnial a legends found inexpensive!

Did you find this review helpful?yesno
»
Read the 12 user reviews on the Roland D-50 »

Listen to the 6 audio files about Roland D-50 »

Roland D-50 manuals and other files