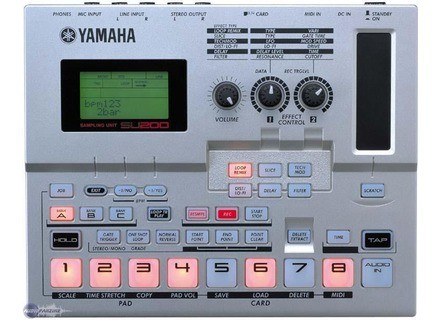 All user reviews for the Yamaha SU200

Average Score:2.3( 2.3/5 based on 4 reviews )
Not satisfied with those reviews?
Our members also liked:

Yamaha SU200
3
I register for the User sentence of movies, sounds divers.que you can run a mix of live ..
c no mpc but for what jen is sufficient cest tres ....
limited internal memory can nest only on / (mono) HI 42sec
STD (standard) 83 SEC
166 LONG SEC
EXLG 333 SEC
8 of 24 sample pad (through 3 of given bank's)
Polyphony has some limited pads.cela depent size sheets used.
denregistrer possibility of bank data on Smart Card Media
cart smart media 128 mb max (standard SSFDC)

effects /
loop remix, slice (sort of cut), mod tech, lo fi dist, delay, filter.
OF USE opportunity to effect a sample. EST and all.
opportunity to re-record the samples by playing ... (basic function is not it?)
super easy to take control of battery-operated, but no backlight in this case.
scratch function q bert really amazing even thought that he would stop for her !!!!!( all the black band on the foto)
connection midi...........in / out mini jack headphone jack 9V power supply
to create good sound but I do not know to launch crasHHHHHHh boom bip
soiréee in cest super ... This

Medium and not be difficult cest first prize .....

A year or so .... TFW 2
lexperience see Jiraiya with a bit more expensive and allows a more pro davoir pre ^

Yamaha SU200
1
Polyphony low, basic effects, small memory (not even a meg I think), a midi in (or thru or out)
Not enough to jump to the ceiling but it's not the worst.

Ultra simple to use, the manual is almost useless.

-First to enjoy the best quality of sound, must pass effects (super, thank you)
, Then this thing is not screwed to complete a sample (the base has done for c'tait eh) without lots of clicks gnrer numriques dgeulasses. rsultat: the machine and totally unusable while on paper the concept is INTERESTED (at least to live).

This is a useless piece of plastic. not because its limits are CHARACTERISTICS (polyphony, ...) because it is good to play with this gene limits, but because all the sounds loop are marred by clicks (like cds jumping)
absolutely avoid.

Nichlaws's review (This content has been automatically translated from French)

Yamaha SU200
1
Cot features, it is true that this may seem BCAN interesting, but do not rely on it as long, it may be particularly tonn to see the (too) low ettendue capabilities.
Polyphony, insufficient
Effects, virtually no
Midi and audio connection standard. No mono outputs spares

Certainly the method of dition of sample is simple, maisd can we really speak of shipping? It is precisely l dcption I could feel by using this machine.
It is a kind of DSP that does the job. The hen onpratique edition of the high dose sample, with SF 6 (sample editor for PC), then recess was enough to be heavily.
Another point of comparison, I use in parallel, a YAMAHA EX5R, who owns a 3000 A chantilloneyr CLNE of the maeque and as many say that the tense of possibilitquot, is without comparison.

Since it is a sampler. all dpend dej source sample, and remarks beast mchante brings us a note again that this machine makes no modif of the structure of the sample, in the sense that it understood in terms of synthesis.
The effects are super basic. filters can only possibly give the feel of a vintage sound type TB ... and again!

Without interest,
Too expensive for what it does!
SAVE a little better and pay Aka

Alcorine's review (This content has been automatically translated from French)

Yamaha SU200
4
The SU200 has 6 voice polyphony, no glove compartment a real but more than adequate sampler for drum sounds and loops synchronized. Note, however, the use of polyphony Stereo food and the impact (2 votes for the Scratch!)
The converters are only correct as it can go up to 5 kHz 44.1 kHz 16-bit, unfortunately, this RESOLUTION block use effects.
Effects super basic, ininterressants limits: the slice and loop remix to change the groove of the loop, a delay when you want oprer valid variations on a rhythm, a filter but not great fun, a disto anecdotal.
The memory is sufficient for standard samples of batteries and two to three loops but it is better to use a smartmdia oprer backups and import sounds from the PC.
The connection is Bigarre: best: I / O format audio jack 1 / 4,
most zero: a MIDI IN, not OUT (not practical in a MIDI config, the SU200 ncessairement should be the end of the string), the headphone output jack 1 / 8.
on the other hand, edit sounds on a computer that is easy, any editor will do, then you TRANSFR the sample on the Smartmedia (provided you have a card reader).

The highlight of the SU200: its extreme simplicity binds to the little buttons and especially its synthetic step trs (all information unless it displays the wave sample).
Sampler, a truncation is the simplicity of a child, enough to be dgout samplers pro for a while (when Akai or E-Mu as easy?). The application is intuitive effects. The sounds are in units of sample dcoups hyper practices when Determines the point of commencement at the end of the sample.
The manual is the image of the machine: simple!

The converters are good, you go up but this RESOLUTION 44.1 kHz, the effects are no longer usable. The frquences range from 44.1 5 through 11 and 22, depending on the nature of sound there is a good dynamic.

I use it for two weeks, but I quickly saw the limitations of bte: polyphony monitor prs, no squenceur (they could at least put a type of "16 steps" as the DX200 and AN200), no multitimbral. I dj possde a SP-303 and Akai S1100 but the SU200 possde j'apprcie few peculiarities: it is easier to handle than the SP-303 especially for the edition samples, it allows a small multi-Sampling of an octave, it syntonize loops to the same tempo for a game live. Its simplicity is what this monument sduisante face with the S1100 hard drive, its menus, its fine ditions and all the rest, and is more flexible than the SP-303 for importing WAV sounds The backup card, the partitioning of non-banks TR-play mode.
At this price you can well pass on anecdotal effects, scratch shit and lack of squenceur.