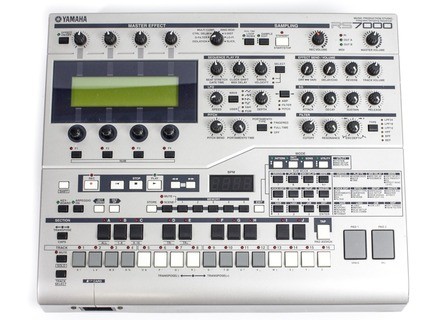 Personally, I find the sequencer is quite complicated but great: everything can be edited! It takes too much time but once you understood how it works, it goes smoothly.

The 64MB memory isn't a lot but I use it with a PC so that's not a problem.

Its main advantages are the sequencer, the drum machine, and the playability live.

Properly edited presets sound good. You'll obviously need to enhance the sounds with some processing or VSTi, but it sounds very good by itself.

The result is much better with an AIEB2 card: the sound becomes clearer and has more punch.

I started three years ago with a RM1x, then I bought a RS7000 one year ago and it's a dream machine. I've sometimes thought about selling it but I never did because I was sure I would regret it.

I previously used Electribe SX and MX (too simple for my taste so it became boring).

The MC808 is a very good device but I like having lots of knobs, like on the RS, which BTW has a very small display (it feels almost like a plastic toy).

The MC303 is really nice considering its price but it's in a totally different league.

As a summary, buy the RS because it's an amazing tool (but don't expect to master it right away).
Did you find this review helpful?yesno
»

Yamaha RS7000
5
The RS 7000 is a great sequencer sampler combo with a decent synth to boot. The real strength of this unit is its real time playback features though. Its pattern chain mode and real time knobs create a real instrument.

This box is for live use. Basically its a pattern sequencer you can put your hand on at every level. Based on Scenes,phrases and patterns the sequencer lets you put together compositions on the fly or in song modes which record basically anything you do on the box in real time. Really all I can say is sit down in front of one.

This is what I dont know about. I think its well put together,but I've encountered issues. First thing is my friend got one too and his OS was bad out the box,it corrupted over time and had to be factory reset constantly. Secondly I dont like the knobs. Personal taste but they are crap. The make of it isnt like an Akia but oh well,at least the box is dope!

I like it. There is better,but after applying the proper master effects and eqing the RS7000 sounds really hot. The D/A converters are way better than most yamaha gear I've had. A few minor OS issues keep this from a 10

I dig it. This is the most fun I've ever had making music. I make tekno house and breaks and have been fighting with other samplers for years. This thing makes it easy for me to record instruments,vocals or drums and get it into a sketch pad immediately. In my opinion its not a studio solution,its an instrument just remember that.

Yamaha RS7000
5
I am totally satisfied with this amazing machine after few add-ups such as 2 extra Rams of 64mb that you definetly need and both should cost no more than $120, the digital output extention card which goes for around $200 and of course a SCSI CD-ROM or CDRW for you to be able to load sound libraries to your machine, however you will have really hard time trying to find a SCSI CD-ROM in year 2002, so you should be prepared to pay another $200 for the external SCSI CDRW. And finally you have a completely amazing machine that can do it all for you for a total of $1900

Very very easy but if you are new to these machines maybe it might take you couple of weeks.

absolutely a live performance machine. I have for almost a year now, I never needed customer support. plus there's tons of user community forums in the net.

Sound quality is good but with the add-on digital outputs it is perfect. The factory sounds is focused on electronic music but you have freedom to sample any sound in it anyways. Effects are great but I would have added 3 more knobs.

Simply blows my mind but I kinda wanna check out the new Akai MPC 4000.

Love it ..i love it..i love it....this is the best midi production tool on this side of the universe..none other compare....i declare..THE RS7K RULER OF ALL GROOVE MACHINES

Originally posted on FutureProducers.com
Posted by: Unknown (January 2-, 2002)
Did you find this review helpful?yesno
»
Read the 33 user reviews on the Yamaha RS7000 »

Yamaha RS7000 manuals and other files