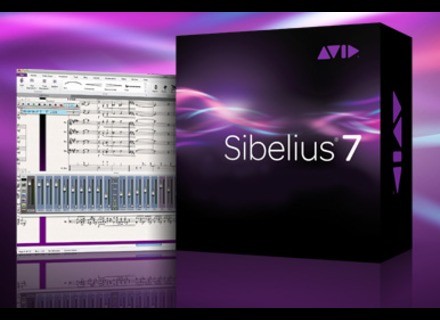 Sibelius Sibelius 7
5
In the scorewriter world, there are two software titles that go head-to-head to become the king of the hill. These two are Sibelius and Finale. In this piece, we’re going to take a look at Sibelius 7.5. I have been using Sibelius for many years now, starting with version 4, to work on my compositions, for arranging/orchestration, and for transcribing music for a variety of clients such as Steve Stine and guest guitar instructors for GuitarZoom. I find Sibelius 7.5 to be essential for my line of work, and therefore it is worth investigating.

Among all the scorewriters I have tried, Sibelius by far is the easiest and fastest to use. I have tried a bunch of software before such as Encore, Guitar Pro, and Finale, but I find Sibelius to be most efficient. The wizard that is available at the beginning can easily provide the general structure of the piece you are working on starting out with assigning the time signature, the key signature, instrumentation, tempo, title, the option to add a pick-up bar, paper size, staff spacing, and others. Once everything has been set through the document wizard, one can immediately begin to notate the piece by using the mouse, the computer keyboard, or a MIDI controller.
Rather than get confused by a plethora of buttons scattered along the sides of the screen, Sibelius groups various functions such as note rhythmic values, expression markings, and others in an item called the keypad. The keypad replicates the standard keyboard numeric keypad and so all that one needs to call up a particular expression symbol such as an accent mark is highlight the note in question and press the button on the numeric keypad corresponding to the desired function. Although it is possible to drop in notes after assigning a particular rhythmic value using the mouse, it is easier to input notes using the computer keyboard or a MIDI controller as if you are typing in a word processor. The magnetic layout function makes it very easy to align staves, lines, chord symbols, lyrics, and other elements to minimize the possibility of symbols and lines overlapping each other. Because of this and other automated processes, composers and music copyists get more time and focus to write down their ideas rather than dabble on the nitty gritty of formatting the appearance of the score.

The big change in Sibelius 7 from previous versions of the software is that the menus now sport a more graphical interface rather than the pull-down menus from previous versions, a trend seen in other software like Microsoft Windows. While long-time users will need to spend some time to adjust to the new interface and relearn other shortcuts, once the interface has become more familiar, things work easier and faster. In previous versions of Sibelius, all of the plugins can be found in a plugins menu. However, in Sibelius 7 upwards, plugins have been grouped accordingly into function. For example, plugins for motif/thematic transformations and variations can be found in the note input section and the “add chord symbol“ plugin can now be found under the text section. Intelligent arrangement (a.k.a. “intelligent copy and paste”) remains the same as in older versions where you can copy a particular passage or section written for one instrument (piano, for example) and have Sibelius automatically arrange it for other instruments or even group of instruments. The thing is that while it may make things easier with plugins and intelligent arrangement, human intervention is still necessary to make them work perfectly. In some cases, intelligent arrangement doesn’t make a lot of sense at all (e.g. rearranging a passage with a tessitura that is too high and difficult, wrong assignment of voices, etc.).
Slur markings in Sibelius 7 remain as flexible as ever as started in Sibelius 6. You can easily create slurs and ligatures with shapes and forms you would deem appropriate for the music. Lines such as slurs are now are generally easier to work with in Sibelius 7 since you can just start by inputting a note, creating a slur, and then input the rest of the notes of the phrase that you want slurred. Sibelius will then automatically extend the slur until you stop inputting notes. The downside to this is that, for people who transcribe guitar music like I usually do, this tends to mess up lines for bends. I usually have to stop inputting notes once I have written the bend line and then restart at the next rest to avoid the bend line from extending to the next set of notes.

The included Sibelius 7 Sound Library adds more realism to the sound of score playback. The percussion sounds seem to be the best of the bunch followed by the woodwinds and brass. The strings are okay and the guitars are the worst. In an effort to add more realism to the guitar sounds, Avid added a fret noise function. The problem is that the fret noise function is exaggerated to the extent that it doesn’t sound very realistic at all. If you’re working with the Sibelius 7 Sound Library’s guitar samples, you most often will need to turn down the fret noise knob. Overall, the new Sibelius 7 Sound Library is good although it is still not at par with other sample libraries like Cinematic Strings 2 or Vienna Symphonic Library.

The most recent projects I have worked on involved the use of Sibelius 7.5, and I am very happy with the results that I have got so far. The response to my work was very good. I am still able to produce high quality scores with it in the most efficient way possible. However, I don’t think I will rely too much on the Sibelius 7 Sound Library for creation of orchestral mockups because I still do think that there are better sample libraries out there that I can still use like Chris Hein Horns Compact or Cinematic Strings 2. Overall, I am very pleased with the results I get from Sibelius 7.5.

Sibelius Sibelius 7
This software works on MAC , Windows Xp and 7. No errors found while using it on both platforms , Xp and 7.

The manual provided by Avid consists from different creative ideas , some very important regarding how the music works.

The general configuration is fairly easy and it doesn't require a lot of time because the size of the software isn't really huge.

The typical functions are easy to access , very decent designed panels , I know an 8 years old kid that uses this program.

The software works good in its configuration , the level of stability isn't a problem.

I'm getting great performances in creating different elements and using the score to obtain different orchestral feelings to the music.

I've been using it for about 6 months now.

What I like most about this notation software is that it inspires people to create music , to learn the essentials of the music , like notation , rhythm , legato , staccato , and other interesting articulations.

I also like the fact that this software supports midi controllers so that way you get a double bonus , you play your instrument and at the same time you get a scoring page , so you could learn and have fun at the same time.

The Magnetic Layout, this is something that is extremely helpful and you also get a ReWire support with this software.

My opinion about the value for the price is great , one of the best notation softwares ever made and you can buy it for about 200 $.

This program is made by Avid which is one of the biggest companies in the music world so don't hesitate in purchasing this product.

Knowing what I know , I would get this program , no doubts , great panels , a lot of sounds , different perspectives regarding notation and scoring.
Did you find this review helpful?yesno
»

Sibelius Sibelius 7
4
The manual is adequate, provided it can be printed (866 pages) I could because I'm in a pro environment (in 3 volumes though)

3 or 4 years
I am a professional writer for 30 years for two orchestras (Radio France), in this context I had the opportunity to use several software, the best was "Berlioz" but unfortunately it could not be supported to develop with computer systems (Mac and PC), we left after 15 years of loyal service. We chose Sibelius for its speed and ease of use, superior to its competitor F ...
yes this choice I would do it again if needed
lack of information in French on new releases

1 Published on 07/28/11
Avid has announced Sibelius 7, the newest version of the music notation software, with MusicXML interchange support, sample library and a new task-oriented user interface.

See all 11 photos of Sibelius Sibelius 7 »