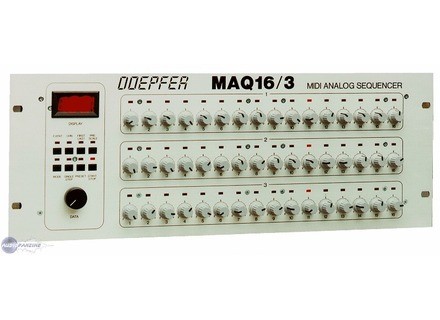 The configuration is heavy, the usual functions not readily available and the documentation is in English

used for 2 years. very expensive! not much better at the bottom a little analog sequencer MFB. I gave it to a friend in the end, who decides to sell it ... sad machine.

6 of 20 people found this review helpful

mako's review (This content has been automatically translated from French)

Doepfer MAQ16/3
5
3x16 Analog Squenceur not.
MIDI IN / OUT (no thru!).
3x CV OUT (mini jack).
Gate 3x OUT (mini jack).
External power supply included (trs and small!).
Each row of 16 steps can be Fully configured, Note (1 5 octaves), Gate (Hard) or vnement Midi Classic (Pitch, CC, etc ...).
Some features may operate in other lines (Dynamics, Notes ...).
Several play modes: Front, Rear, front / rear, Random, One Shot, No No, etc. ...
Note, the One Shot also allows to chain 2 or 3 lines To create a squence up 48 steps.
Each line is Fully configurable: MIDI channel, first step, not Last, Divisions Tempo, Step on / off, etc ...
The output is simultaneously the CV / Gate and the midi out.
In the South can servire to Midi Clock, Start-Stop, or controlled by a keyboard to transpose the matre squence or change various modes or via Notes ProgramChange.
It was always afraid Strorer the memory 30.

All functions are in the menus accessiblent by 8 keys.
It takes a lot of practice to respond to Live in the menus but it is possible without the machine packs (be careful not to miss a note off!).
The setting is sometimes complicated, but many combinations are possible.
The doc is in English by Germans rdige therefore sometimes confused.
It takes some getting used machine ...

I use it in Midi and CV, with both machines with the vintage rcentes.
No prob with Synchro (Matre or Slave).
This is one of the few full-MODELS (Midi + CV) a fair price.
Manufacturing Doepfer ... So strong and serious.
I do not regret my purchase.

See notes at the end

What can I say!

The MAQ 16 / 3 if you are not motivated to understand, it can serve as a chase hypnotic, it makes clear a headache at the beginning!
My opinion is that it's super powerful, it took me about 1 hour to make a first sequence! and a few days to make a super chiadée. Now I matrise lot in 7 days I find that even if the human interface is outdated we get a do well.

What is missing most to me is an editor software, we regress a bit.

For analog, it should be capable of both the driver volt / octave as Hz / volt (the it is in volt / octave standard Moog / ARP epoch) it is a shame for the yamaha series CS, unless they are modified, or use a converter.

-Robustness in the design of the OS (yet to be planted)
-Simple and roubuste
-Game can live so well programmed before
-3 HP, 3 Gates, Nickel!
-Function simultaneously as MIDI and CV
-Possibility to control MIDI instrument (all I think even a mixer, effects, if if if)
-Ability to sequence in all directions
-Ability to transpose
-Up to 48 steps!

=== Least. ===
-Lack an on / off by switch, rather than by rotation of a knob (personal opinion)
2.5 micro-jack, that's frankly an economy has two balls, it's not reliable, especially fragile and it is not the norm.
Lack a midi-Thru
Lack-a second MIDI interface
Part-DUMP exotic, real tired of the old has to do.
-Lack sysex for the external management.
Doc-in English, although quite complete I think
The look ... well, some like it like that too.
-Update super expensive controller card + eprom for version 1.xx
-Mode V / octave frozen

=== === The innaceptables
He clearly lacks a display worthy of the name, it must be systematically paw the doc to understand the abbreviations on a display a 3-digit LED is worthy of 75 years.
-The external power supply ... frankly given space in the box and the super low energy need someone to explain this choice idiot ...
Finishing the box (it's not essential, but the screw was half a horse in the display, I do this when I was 15 and I stripped my achievements)
Award-nine, do not push it!

In the end, no real competition Dopf did a good job, it's certainly improved, but it is not directed too much at first (which may also be damage)
Understandably, the physical sequence of a + incredible for live, even when careful not to overload if the sequence is complex. For the analogue of it back to the sequencer Korg SQ-10!
Good stuff but if not patient, not motivated, do not buy!

Doepfer MAQ16/3 manuals and other files