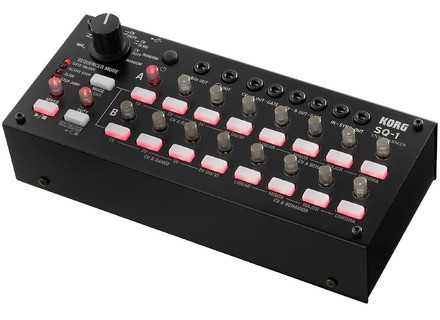 All user reviews for the Korg SQ-1

Korg SQ-1
4
- I use it with mono and poly synths (with a MIDIpal to sequence chords), but I essentially got it for using with a Korg Arp Odyssey.
- I receives it some 6 hours ago
- I already have other sequencers.

It's a small 2x8-steps sequencer on 2 channels (or 16-steps sequencer on a single channel) sequencer, all-analog, with MIDI out and USB. It can be powered with two batteries (for approximately 5 hours) or the USB port, and a lot of connectors are provided for synchronizing.

It features 8 playing modes, in Z, W, alternate, parallel or serial and of course random. You can choose the steps that are to be read (on/off gate), the step jump, the active step (unselected steps are jumped and the number of steps gats lower with it, allowing twisted sounds) and glided steps.

Pros: its reduced learning curve, its minor/major modes that allow to gain time with pitches, its (lit) step pads, its many connection/sync slots ans how easy it is to use as a whole. Its appearance and sturdy look (metal case weighing approximately 1.3 lbs).

Cons: the main flaw in this device is the mode selector which forces the device to get sync to the first step, so you just can't change mode on-the-fly while playing live - at least you can't with it as a master controller. Also, you won't be able to take advantage of the glide settings if you use it in MIDI, which is quite frustrating.

The SQ1's main aim is to deliver patterns on the fly in a really old-school manner, as for more elaborate lines there are much more up-to-date devices. Of course, it allows to modulate other settings such as a filter's frequency cut. Il brings a real electronic and mechanical-sounding touch to your prod, by the way no groove or shuffle setting is available. This makes for a very limited device, just like older analog sequencers (and its bigger brother), but its very practical and finally quite inspirational.

I would have liked the possibility to change mode without having to relaunche the sequence, and tp save a few lines. On this matter, the device sends both channels' pitches and gates through MIDI, so it's easy to get the MIDI data (on an MPS for instance) and save it there.

Except for the position of the knobs, rebooting the device won't allow you to get the previous program - really old-school!

To sync the SQ-1 as a slave, you can either use USB (for configs involving a computer), a Voca, a TR or any other unit with either MIDI or jack (old-school style!) sync. For instance if I want my MPC to be the master in the chain, I send its clock to the TR 707 and the sync to the SQ-1 will be done using the 707's sync out slot and the SQ-1's sync in. The Volca can also receive MIDI and send sync on its (mini jack) sync out.

Last but not least, it can be used as a MIDI converter through CV-gate, as all data entering the USB/MIDI in are transmitted to the SQ-1's CV/Gate out.
View price information
Did you find this review helpful?yesno
Cookies help us improve performance, enhance user experience and deliver our services. By using our services, you agree to our use of cookies. Find out more.