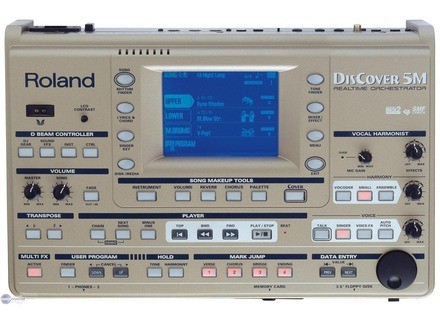 Zézère's review (This content has been automatically translated from French)

Roland DisCover 5M
4
This is an expander put on the table, or on a rigid panel. Possde It sounds great, normment sounds, there is no style but some patterns (rhythmic patterns) on which to play. Sounds are ditables, but it is better to keep the original ones, the pallet factory is more than enough to work. It is compatible GM 2.
The connectors that I use: midi in, out of the vocal harmonizer, leaving the sounds of the instrument, microphone jack (6.35)

Setup is simple. The edition is easy and the effects of rglages like usual, especially since the device possde a touch screen.
The manual is clear trsdtaill too sometimes!
But I bought the unit in HUGOCEPS, located in France, and mauel is in German, they closed the door ds me that the sale was made t, despite the thousands of 'mail I sent, these are really ENFOIRES this level, they did not even contact Roland France for the manual in French. I have a copy rcuperer unprintable thanks Internet and other REPRESENTATIVES.
Zro HUGOCEPS bridges on this problem, but if he sends me, I hasten to change this opinion.

I mainly used to sing in restaurants, and its right for me, it can rgler volume, sound, atmosphre (techno, classical, rock ..) in real time. Sounds like those GM1 t dvelopps the G800, but the new, romantic trumpet poustoufflante.
The sound effects suitable, we always Opportunities within the season his own vision.
The sound of the bass, rel at stake, seems to me quite as round as the G800 yet. I use it when the bass is absent in a church on the island of Runion. I like the violins, choirs ...

I use it since January, I bought it in December, the fault to the manual in German.
APRs have cost the Pa1Xpro Korg, my sounds have become ridiculous, but they hold the road even when. I try the RA800, but the words n'taient not displayed. With Discover, I do not need to book, and more TV-out venture to sing along.
The price is a bit lev. At Hugoceps, I opt for a low price. A customs it has t fatal, 260 euros for it out of the office, I pay around 1500, making 1700, Runions, lba buy it, there is no ban'na duty. Rel at stake for the sounds, this expander will its price, but you have to use it in the studio.
I fai the choice from its weight, its size, but I will go to her at the expander Korg Pa1X
Did you find this review helpful?yesno
»