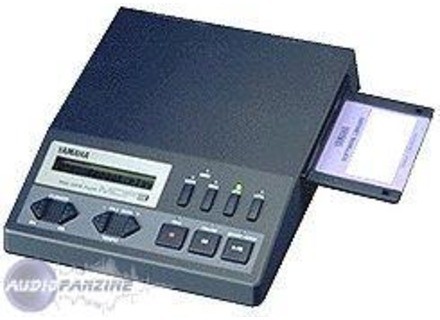 Spawn-X's review (This content has been automatically translated from French)" Superpratique, supersolid ..."

Yamaha MDF3
4
It is a device capable of storing MIDI data to disk and restore them independently (read "without a computer").
Specifically, it is able to record a MIDI sequence (for example after a Cubase computer), and then to read the MIDI data stored on disk. In this case, it must be borne in mind that the MDF3 produces no sound because it does not contain sound generator type General MIDI or anything like that. It is truly a MIDI sequencer in the original sense of the term. It is therefore necessary to connect the MIDI output to one or more expanders / synths / samplers to finally read the trigger MIDI sequences of sounds.
It can also, for example, to store the settings of various machines via MIDI Bulk Dump procedure classic. For example, multi-FX presets, and synth sounds, or SysEx. It is obviously then able to return to the original machine. This is a very useful machine, for example, to clear the internal memory of a device of its kind Yamaha QY70/100 without losing any data to, and possibly reload it later this m ^ m data for rework.
On stage, he also finds many uses.
For example it is possible to book a MIDI channel for each machine in your set and program all your sound changes there. A dedicated control channel to a DMX controller will allow you for example to synchronize your lights on stage without any human intervention. To show you the Pink Floyd! , Op.
As a guitarist who tortured a bit also plays the guitar / synth, the MDF3 has often been of great help to keep me on stage to play and tap some sounds or change some settings automatically.
I just regret the absence of a simple internal audio metronome would have to click to the drummer without having to "sacrifice" a channel for this one use, but hey, I quibble.

This machine is relatively simple, but some logical operation are not necessarily obvious. Sometimes you just grope before finding the correct behavior, but it is worth considering the services rendered.
Nowadays, this machine may seem outdated, but ultimately, it still has a bright future ahead of it given the fact that for those who do not want a computer on stage, viable solutions are not legions ...
Finally, after more than 10 years of loyal service, my MDF3 always answers this.
The floppy it's a little vintage, but in these times of planned obsolescence, I say hats off to Yamaha ...

As mentioned above and in other reviews, this section is null and void since the machine does not contain any sound. It is not its function.

Purchased in 97 or 98 (I know too much ...), this bike has made me proud and services continues to serve me bravely. I might be a little shit in the day when it will make the soul that I hope to see the latest possible. It must be admitted that at the time, Yamaha built solid. My DX7 83 does not contradict me elsewhere. In short, a highly recommendable machine despite his age.

man machine's review (This content has been automatically translated from French)

Yamaha MDF3
5
The MDF3 is a recorder / player 1 MIDI sequence track 16 channels.
The connection comes down to a MIDI in, MIDI out 1, 1 pedal input for footswitch control start / stop and a power connector for an external transformer.
No sound internally.
Its role is limited to that of a notepad MIDI or a floppy sequences fast and convenient for the stage.
Floppy disk 2HD.
Battery powered too.
Midifile compatible with a small change on the floppy via PC.

The manual is well detailed considering the simplicity of the device.
The functions are few, but the vocation of MDF 3 is not to be a multi-sequencer to create complex pieces.
It does also not edit the songs, except to change the tempo.
Easily configurable, it allows you to program chaining, repeated readings, can be synchronized with another sequencer or other MIDI hardware (useful for recovering sequences from another device).
Can also be used as backup sound bank by noon dump of sync for a second sequence automation dtd ... in fact, it spits out absolutely everything that makes him swallow MIDI and cash rather well, despite its small.

No sound interne.Ce is not its role.

I use it since 1999, first to replace a pro24 + atari for the stage (small footprint, ease of use, speed of execution, chaining possible ...). Then as a backup of my sound banks perso.Enfin as a recorder / player automation noon in sync with a recorder dtd.Pourquoi buy a gas plant when it needs only basic functions of a sequencer? Real-time recording of the 16 midi channels, can name the files, copy disks, midifile player, portable sequencer stage, solid ...
I found it a bit expensive to buy (3200F at the time) given the limited editing features but it saves me a lot of time, place, and avoided hours of making your head! !
If it did not exist would have to invent!

I tried to Save the sound of the floppy drive on with a good mic preamp and power, to make industrial music. It y'avait a very strong background sound, sound (mechanical) buttons, but not really the sound of the player. The beast does not make much noise. Not good.

I do not use the sequencer. Sauvegardage I use for bulk data of my drum machines and sequencers. I bought in 1999 or 2000 new and I have never used another device.

No problems, it works very well.

I would do this choice without hesitation.

Yamaha MDF3 manuals and other files