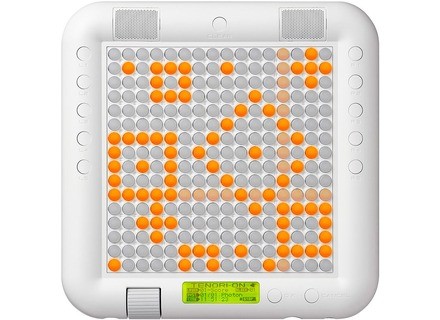 ddn's review (This content has been automatically translated from French)" What kind of music you play? The Tenori-On"

Yamaha Tenori-on TNR-O
5
A white square thing plastoc awful aging well with an array of buttons. Connectors, uh, so let's see. Something to connect the transformer. Something for connecting headphones or make out the sound of what you want with a 2.5 jack An SD card for updates and backups and if you like jokes made in Yamaha import samples. A type DIN connector that allows you to connect an adapter to another MIDI stuff for sequencing.
Uh. That's it. So, USB zero, zero battery / battery coughed. Was daring still a creature initially sold more than 600 bullets.
Oh yes, there's a pretty orange cover. HP Logitech would be ashamed to market front. A microscopic LCD backlit display (still) down. And a matrix whatmille buttons that light up in orange to play, that's good that's why we wanted to.

The configuration is ... I say special. There is a manual that explains everything well. The display on the bike is a little off-putting because it is small and at first it's a bit of a chore. Very quickly, we understand the logic of the machine and there, something happens. It is simple. Even this is not just light, so to say. You got the impression that all the years you've spent too much hassle with trackers (ModPlug, NoiseTracker those Amiga on 3.11, etc..) You prepared to use only this machine there. It is hard to describe because next functions sequencer classic patterns there's stuff from another world that I give to explain watch videos on Youtube to get an idea.
I have never met such a simple machine with such a creative potential.

More ... The sounds are a little, see, how to say without being offensive ... A little lame. We can hardly change (just their pitch and duration), they are not very many (but very different), they are quite typed techno/chiptune/8 bits / tracker. The import function samples does absolutely nothing, you can import samples with gender one second over the last four channels of the bike which is already provided in ample drumkits. So obviously you can control another device with the matrix, it is also great fun to do and I enjoyed the creativity that happens. Coupled with a desktop synth good as a Virus or NordRack is good good good.
But it's too complicated. So I came back to the creature sounds lame. And I'm used to. I make music with sounds lame I listen all alone in my bed, his face lit by small lights orange, with a smile. I like. My 5 year old daughter made beats with the Bounce function, she loves. My daughter's favorite DS game is Elektroplankton, so imagine if he likes it, the Tenori-On. Sometimes instead of reading a story we did a little techno session / chiptune both, we had a good laugh.

I have a few months. I had a kaossillator first generation machine "comparable", which is much less rich (normal, it is much cheaper).
I think this is something that should be tried, because you might try to describe it, it's an experience. This is a Tenori-On, it's the Tenori-On, namely yours. I do not think we should see him as an instrument in the classical sense of the term, it is just itself, you have the right not to like it.
I love it, I assure you it is true. But I have a message for the guys at Yamaha. The next time you sell a piece of plastoc ended badly coming out of the sounds that would have been proud Amiga 1989 with flashing lights, sell the 80 euros using the example of the Monotron. Because if I bought it new at the price you're selling, or even if I had bought used for trading, I would have come myself in your home from Japan to tell you the profanity and pee in your tea.

Anonymous 's review (This content has been automatically translated from French)" it is clean and japonisant!"

not need pc, except for the ability ridiculous sampler

easy live, this is the menu that are a bit like Cartesian LOAD and SAVE are quite far despite obvious to use them regularly, I mean not even the way to name a file!
Briefly, the preparation phases are long because the wheel and two buttons will do 1 to 1

we love transpostion easy way to make the CUED,
we love the big bass live at the ambient
we do not like the weather effects look!

1 year, I still need the manual to find the menu tree
I regret the output signal boost if we add effects
the price drop in winter 2011 (- 50% of the orange model without battery, plastic shell), ca it was
the thing more: the LEDs that light is actually a sequence compatible with anything!
approach its pretty dry, electro, ambient or slick and other music for plants
the sampler is zero, must be put to one side for example KJP3 be really fun

nobazz's review (This content has been automatically translated from French)" A toy, but not that!"

Yamaha Tenori-on TNR-O
5
I do not return dtail in the Technical Specifications ... Cot audio output jack minijack, cot twelve one I / O adapter. Caution: between only serves to connect a different tenor (pity we can not connect a MIDI keyboard to play (well) of the VLOC. But the MIDI sequencer allows n 'Midif matter what trick for a little one can configure the channels (which is not the case on tenor). And the modes of composition make it a true sequencer fun ^ ^

Some t surprised by its size. Yes it is small indeed. But there's no need for more. I have the orange version, and It looks fairly sturdy, although it is lightweight.

It's very simple. It looks impressive everywhere, but a flash he was on hand to rev soon, even without a manual. For the edition, the matrix can configure almost everything Fawn trs visual display and buttons on the latraux (mini) desktop context menu. Everything is perfectly Designed, for the settings with its own little prsentation we do not gourrer; hat.

The configuration menu / files is a bit cumbersome, it reminds me a little the first mobile softphone showed three lines. But a good will, there's not so much a paramtrer and no one passes his life in it.

Well I love them. It gives it its unique cot. Diffile dcrire of the bank, but there is nothing cheap if you do not try to compare it with realistic sounds ... It sounds. APRS ca should not actually have any kind of music. I made a little demo that shows a little sound of the animal characters:

In fact his bank Integrates perfectly into my work environment, I have nothing that looks like a, between banks of samples and synths. And these sounds are perfect the way it has components.

The big downside to the device, the lack of VLOC .... Logical since it is of buttons, but I AIM to enter some notes from an external keyboard, or even correct them manually. APRS voila, I used especially for trimming sequences in live, and works perfectly. There's swing from the dernire MAJ.

Although conumme in orange finish (even if the other-overpriced-must be much more fun) c'set a single instrument, small, hypnotic ... He is the complment ideal for those who make music electro calm and think all have as sound palette. His squenceur gnial gives ides and allows in no programmed melodies and structures with fun swirls.

It is true that the absence of a cell compartiement is finally some con.

For the price that is currently selling the orange is really cool. There is overlap with anything, I feel like I have a device that will be useful no matter what it is so spcial characters and in its operation. Yes I would do this choice, all fawn there's no choice. Ipad version? I do not think that pleasure is the same: touch, Lumire ... Ah ... No, I keep my plastic toy ^ ^

revega's review (This content has been automatically translated from French)" Great invention and a sequencer to none."

Yamaha Tenori-on TNR-O
4
The Tenori is probably one of the most innovative of the last 10 years. Already copied as controllers and other interface of the same ilk is the original course, a true light.

In short this version 'light' than the previous one but also less expensive you will have:

Short enough to fill your time and open up real prospects.

The use requires a little patience just to understand the system matrix of the machine and then it will own. The manual is extremely well done and guide you logically without falling asleep by processes of heavy instructions.
Once lit it tenori discovers a world of building rhythms and sounds and this with just one finger. Amazing! It has 6 modes of composition and it gives wealth sequences. The most surprising is the bounce that can give a random next to the composition so amazing.
The Speakers are useful but the overall volume is low we can only moderately enjoy (but it is a 'plus' nice nonetheless).
The South used to synchronize the Tenori and especially using it as a sequencer. And then the tool becomes a friend of all your sound generators with a 'Midi in' or adapter 'CV / Gate = Midi'. This allows editing of sequences quickly and very playful. Indeed in many ways I use it as a sequencer and it snaps altogether. He made an excellent impression on this point.
Too bad the 'start / stop' is not more evolved because the reset is not done. So that when the tenori runs on a 'time clock' as a 'slave' during a reboot to stop it suddenly stopping position for you to lock onto him. A bit painful but not fatal unless all this is only a matter of adjustment (to see).

The sounds are simple and Yamaha has put in his bike than the bare minimum with a very cheap side. One would think that the banks are from FM synth. Very cold and minimalist in the extreme but not unpleasant. This is reminiscent of Kraftwerk and some Arpanet, robotics and haunting.
Yamaha on this point probably wanted to highlight the futuristic Tenori as a tool away from the outpouring analog if present in our time.
And curiously, when the machine running, you can get funny sound palettes. Japanese idea of ​​the future? It's possible after all. In any case it's weird. For effects there are two that are useful but far from good. Let's say it served its purpose for 'warm' atmosphere a little and give this side vaporous.

use for 1 month and I find the tool very relevant today.
TNR-O version, this one thus making it more accessible (around € 250) than the first version Metallic certainly more beautiful and more independent (battery).

Note a bank of sounds not very convincing (is this his first vocation?) And a control screen a bit small but it is a lesser evil compared to the huge qualities of the machine.
Enjoy!