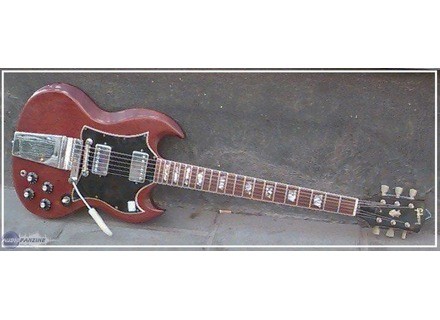 SG Vibrola (1968), SG-Shaped Guitar from Gibson in the SG series.

ocoupy's review (This content has been automatically translated from French)

Gibson SG Vibrola (1968)
5
US, bought in France for sale in the 80
CONFTG EXCEPT COMM ON PHOTO 1967
ROUND AND ROUND AND SO SWEET AND OLD DREAM, CA SURF ALONE.

IT'S IN ITS SG, IF THIS IS THE BEST, CONFIGURATION.
Lgre, ergonomic.
His legendary, hot and biting both

Our love story is 24 years old
I like his age (38 years !!!), its history and very modern yet vintage sound
I possde 12 other guitar.

sr well I would do this choice tomorrow, but there is more .... a long time
Pay 300 euros era: I do not know the price now
Did you find this review helpful?yesno
»

bduff's review (This content has been automatically translated from French)

A priori it is a rock guitar and does well trs, trs to clean the crunchy, rhythmic solo of always keeping his characters.
Joli's "jazz" on the neck pickup.
The sound is slamming a LP with a little less sustain

I use it since the late 70's, no failures, reliability flawless!
It's always good to get out of his body: beautiful, lgre, it sounds like one.
Start a Camlon least, you can play all styles with, even the "jazz" ...
QualitPrix: pay a minimum wage by 77
In the silent era the choice simple: Gibson or Fender out there is no salvation, otherwise Jacobacci
Did you find this review helpful?yesno
»

maxime.ber's review (This content has been automatically translated from French)

Gibson SG Vibrola (1968)
5
Just click here autentic a Gibson SG U.S. standart of 68 (or 69 I do not know).
But it is a very rare model, because it left a copy with Bigsby (as in the photo.
The frets are almost nonexistent now, but it gives a new style of play, I find even that pleasant.

We will say that I have not really tested at the highest potential to be, because I bought it less than a month in Britain, a person I remertie particularly by his kindness and generosity ( AF Member)
and I had to part with it for a while because I had to go on a trip to engleterre, not want to damage it ^ ^!

So much fun to play, it's a pleasure!
2 years later:
Thick handle on as normal Gibon, access to the latest frets is vrément décncertent, one can place a solo dimebag's without any trouble (as long to get used to fret a little flat).
In weight I think she tends to lean slightly forward and is unlikely to be a little heavier than normal SG, I have not really compared, but it seems to me. After adjusting the height of the microphones, I come with an equal volume (2 years ago completely different, so very very ch * ant), but the most interesting is vrément the big difference between the microphones. The bridge pickups us out of acute pest but with little bass and the neck pickup gives us a round, heavy, hot and very serious (see a little bit too much). the middle position so new offers an assortment of these two sounds, very pleasant to listen, and play

Noise level, I was able to know exactly pa potential
for I have only tested on a fender vintage lamps 100 watts (still beautiful beast) and on my Marshall 100 ac valvstate a Line 6 Uber Metal .... and sounds, there was, c vrement beautiful ...

but I am still waiting to return to France in September and resume rehearsals with my band, but this time with a pearl of love! (How beautiful ....)
2 years later:
Ben I play mainly heavy rock, metal, so we can tell which is the case, even if Dean or Jackson should be better now in my game
As I said previously, a lot of bass on the neck pickup and a lot of Acute bridge pickup. So use one at the same time is quite complicated to find his ideal. After some time I managed to find how to use them instead of using the two, so now it's a real pleasure.

I use only 3 days as I told you, but I fell in love.
I am also in search of the stem of vibrato that was lost by my dealer ... (Very hard to find)

Quite a change has to do (especially mechanical level) but hey, that's when you see a retailer that gives her at the end!
1000euro-and in good condition, especially knowing that it comes from Britain, Morbihant, she has already suffered changes in temperature, very beneficial for the resistance of the guitar

PS: excuse me for spelling I'm on an English keyboard, and sorry no accent!
2 years later:
I use it now for just over 1 year and a half, and what I like about it is ... age. and yes, playing with a guitar that has lived so long with the pet of all the side, she has lived. and it feels!
The least is that I find it a little too rock shot 80, while playing with the metal is not unpleasant, we do not find the same sensations. that is why I would not put 9 and 10.
I left so I have not tested many different models, but enough to know that what I have here I like. I refer this choice without hesitation. Us an opportunity like this does not represent like that. especially 1000euros (which is priced the same, not necessarily within the reach of everyone) I think it's worth it.
Did you find this review helpful?yesno
»