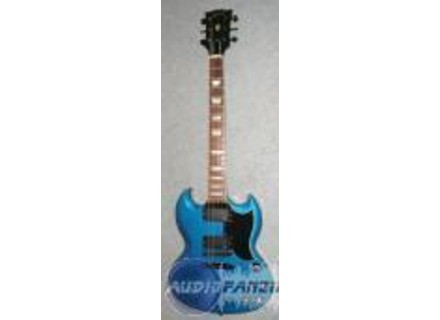 Gibson SG '62 Showcase Edition
4
When my absolute favorite guitars is ever been created is a Gibson SG guitar. It has a classic look and almost devilish look to it. With the two cutaways on the top and bottom it almost looks like devil horns and is everything that you would think of and expect from an absurd obnoxious rock 'n roll music. It has the identity of a angry guitar just by the appearance of it and when you plug it into a high gain amplifier you get to hear all of those lush warm and angry tones.

This guitar is very easy to play compared to a Paul Reed Smith guitar in my opinion the parties with the cars have a similar cut away in the top bottom although the shape of the body itself is very different there is a similar balance to the overall guitar between both Paul Reed Smith guitars such as the 22 in the 24 and this Gibson SG guitar.

The tone of his guitar is very similar to the Gibson Les Paul guitar however has a little bit thinner and more focused tone. Since the body shape is a little bit thinner than a Gibson Les Paul and the neck is longer there seems to be a more focused tone in my opinion and it lends itself to hear more note separation. What I found to be true is that you can play this guitar with the cleaner amplifier setting much better than a Gibson Les Paul. I get some Les Paul tone is extremely warm and musical but I find it lacks when you play a clean settings are cleaned town. This guitar does a lack in my opinion when you hook it up to extender clean or just a clean Tony general. You can hear each note very clearly and it is very well-balanced overall.


I like this guitar with pretty much any amplifier that you put it in front of. I played this with a fender amplifier for clean settings as well as Marshall amplifiers and even Mesa boogie amplifiers. And pretty much every setting I've played NSG through it just sounds so much far superior than many guitars I've ever picked up. It can get angry and clean with just a simple roll of the volume knob. What also I like about this guitar is the ability to reach the higher frets without having any complications of the body neck joint. Where you do you ever play to Gibson Les Paul you know it's pretty difficult to reach the higher fretboard because you're back of your hand gets caught on the body and it makes it very difficult to play up in the higher frets. This guitar you can play at the higher frets with ease and comfort ability and that's why I lean towards this guitar in a soloing and recording application.

This guitar coming right around $1100 used in most cases which is a great fair price for this guitar. Very musical guitar and establish tone that will give the user the ability to play in just about any setting. You can record with this guitar and use it in a gigging setting very easily. The prices very competitive and for what you get with this guitar is a lot more compared to some boutique guitars out there. I highly recommend this guitar to anyone who wants to step into a good warm musical rocking roll tone guitar.