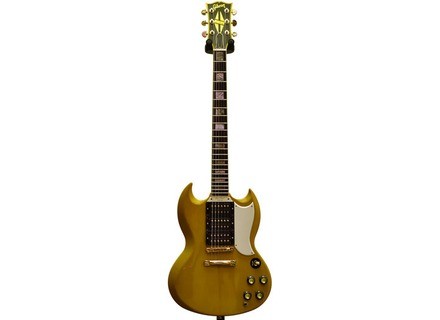 All user reviews for the Gibson 30th Anniversary SG Custom

Gibson 30th Anniversary SG Custom
5
Made in U.S.
3 classic pickups 57 (...!)
stop bar in standard classical
same settings as the other, except that the mid-position switch has the microphone mid-
handle thinner than the standard, it gives me the important point of this guitar.
I do not like vibs nor the complicated stuff to the robot guitar, I put 10 parcque middle pickup gives the impression of having split the humbuckers ...

Channel fantastic ... in my case of course.
Acute attacks great compared to my other custom ... The Les paul ...
Nice weight, we qqchose of itself, but no back pain after 3 or 4 hours ...
I can not tear myself over the forearm on the edge of the body, a point appreciated by my doctor ...
Good sound obtained by plugging the guitar, it is electric ... crazy right?
9 becaufe the imbalance is present at the first sensation.
And no, I sold a 10 becaufe, it will swell the notes ...

Although ...
She did everything that he do demande.Je beaucoupo rock, but more pop stuff, it is very accurate, the 57 are not in the poor, I understand why some people seek these microphones.

I play on Laney TT50H Laboga in vintage and 30, pb no heat or anything, this amp is a rule.

No effects, except in special prods in the studio, but not scène.Elle is more terrifying than the rock in the blues, though it must depend on the fingers is on them ...

It is true that my standard is "pretty" stuff in a little roots, but I can not say that the custom is cold.
It is more accurate and the sound is a little less sharp round on the mic, but everything works out with the middle miocro

I do not hate the sound with this guitar, or with any other for that matter.

Well, I have this guitar since qques months, it is really terrible, I appreciate the power of sound, huge and light weight compared to the Les Paul, again its sustain is amazing.
I tried and owned lots of guitars in my life, I do not know how or all models, but this one, with the LP, I'll remember.

The ratio Q / P is for me very good, I have not tried to SG Les Paul Custom 'basic', ie without being anniversary.

I would like to keep it, but I ruined the Euro, with the experience I remake this choice, but I'm not rich enough to own this board, and that's a shame ...
Did you find this review helpful?yesno
Cookies help us improve performance, enhance user experience and deliver our services. By using our services, you agree to our use of cookies. Find out more.