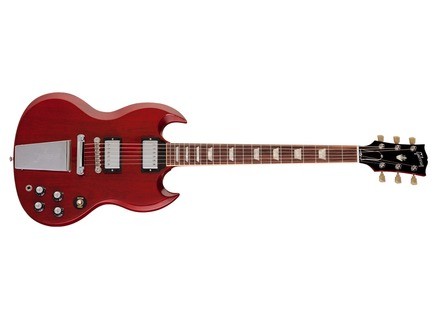 Md Max's review"The sound of the Allmans, of the Susan Tedeshi's Band or AC/DC... so so!"

Gibson Derek Trucks Signature SG
3
Gibson SG Derek Trucks, tried it in a store but did not buy it. Tried on a modern Marshall halfstack with clean and crunch channels, with a fender hot rod, a fender Princeton reverb, a 65 deluxe reverb. I've tried it for half an hour.

This instrument features a 3-way switch, 2 tone controls & 2 volume controls with 500K pots (much bass and highs, little means and a more “open” –frequencywise– sound volume in spite of the lesser mids), with 2 gibson classic 57 standard pickups. No bumble bee condenser or anything of the kind, just a classic, ceramic condenser, under 22 nanofarad.

Workmanship was flawless on the guitar I tried, no ungluing, lacuer lacking or anything. The rosewood fingerboard seems a bit poor, light-to-dark grey, slightly colored – but still better than a Mexican fender or Chinese/Korean epiphone, in case you’d wonder.

The neck is very comfortable if you already appreciate the es 330/335 or 1990s epiphone dot. I’ve owned a gibson sg in the past and this neck has nothing to do with an SG or LES PAUL, it’s a comfortable neck that perfectly fits a small- to average-sized hand, with the back of the neck slightly flat, which I believe favors slides.

I won’t detail for each of the 3 aforementioned amps, I’ve remarked the same things:

- A lot of clean a slight crunch which remains clean, for a real thick overdrive push the amp’s level, even with a 15 or 22W tube amp. Almost a fender-like sound, still with the typical classic 57 gibson sound, you could swear the classic 57 were split when put on the guitar. This is how you could sum up its sound.

- The control knobs don’t act progressively, 7 to 10 to get a sound, below it you can’t hear it.

- High frequencies sound reinforced compared with a normal classic 57 plugged on a fender amp, and this sounds even more obvious on a reverb amp. The bridge pickup switch position is rarely used at all, the two other ones are enough.

- Perfect for slide due to its neck, the pickups suit it too, for jazz, swing or not, classical, slightly driven blues swing. For Rolling Stones to harder (and beyond) styles an effect pedal is mandatory, but it’s also ideal for country music.

- I really don’t recommend it to anyone after a more driven or even progressive rock sound, more southern or grunge, of course it’s a SG but its pickups are weak-sounding – well defined but weak-sounding. You’d need a series of overdrive pedals depending on the style you’re after, or to invest in better quality, less standard/more upper-grade pots, or invest in high-range CTS (non-fender or Gibson), or pro-audio to remain ina gibsonian spirit, all with a shorter pot course as is already the case with this model. Also consider investing in another condenser if the highs sound problematic to you (I’d recommend 22 nf oilpaper carbon). Finally, you could play your 15 or 22 W fender ar half volume while boosting the bass and mids and lowering the trebles, or at 10 on a marshall half-stack, or at 4 on a hot rod to get an acceptable sound out of this guitar.

- I recommend it to the beginners, as the neck is incredible comfortable and the instrument itself is a real lightweight, so it won’t ever hurt your shoulder or give you cramps. The neck is a real highway, but it won’t make you sound like AC/DC, NIRVANA, BLACK SABBATH, unless you have pedals or the possibility to play louder. Or you can invest in a pair of really custom pickups (such as MS PICKUPS, HEP CAT, BAREKNUCKLE, LNDLY FRALIN, DOMINGER) or put Gibson burstbuckers 1/2 or 1/3 or 2/3, or replace only the bridge pickup for a burstbucker.

- I advise SG custom and les paul fans against getting this model, you’d be disappointed though you’d gain in terms of playing comfort and would spare your soulder and back as the guitar is very light – strangely for a SG even though the classic model itself is already known to be light.

- Classic 57/57+ that have nothing in common with the classic models normally used on the ES or other guitars, a lot of clean for only a slight overdrive – if you get any at all. Almost a single-coil sound, but it’s better than a modern fender standard strat or a US deluxe or a fender with wide range pickups – closer to a telecaster actually, but with a Gibson touch.

- The pots are not progressive enough, you can’t use them for nuance which can be a real problem if you’re a blues rock player who often plays this way..

- the rosewood fingerboard could be better, you expect better for such a price.

The biggest FLAW : a very bad value-for-money, as the price tag is way too high, and if one has to choose from a single-coil signature fender or this one a lot will legitimately prefer the fender, if only due to the very peculiar sound of this classic 57 model which is not the same compared with an ES or Les Paul, or even a SG Custom.

Derectrucksly yours!
Did you find this review helpful?yesno
»