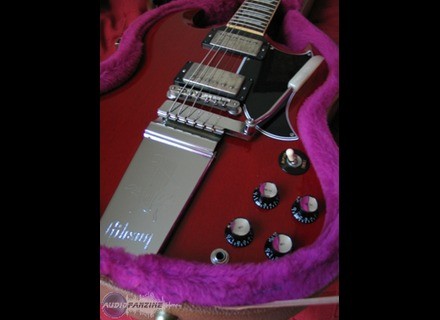 '61 SG Reissue, SG-Shaped Guitar from Gibson in the SG series.

See all 6 classified ads about the Gibson '61 SG Reissue »

Gibson '61 SG Reissue
5
The Gibson SG is one of the greatest rock 'n roll guitars that has come out in the last 40 years. You can easily recognize this guitar if you have listened to any of AC/DC's albums or Pete Townshend from the Hill. This guitar was a primary guitar for Pete Townsend back in the 70s and is still the feature guitar for Angus Young of AC/DC. This guitar has a interpretation from a Les Paul but takes his own route into creation. It has two cutaways on top and bottom where the Gibson Les Paul only has a cut away on the bottom. It features if the cheap features a thinner body compared to a Gibson Les Paul but it keeps most of the Les Paul shape intact. There is two cutaways on top and bottom and the net access is a lot easier because of the cutaway on this guitar. So essentially you can reach the upper frets a lot better and easier compared to a Gibson Les Paul. Like I said body is thinner it is still mahogany on the body and it is mahogany in the neck a rosewood fretboard.

You also have to humbuckers the volume controls and the tone controls as well as the pickup selector. This guitar also features 490 our humbuckers in the neck and bridge position. The scale is a 24" 3/4 inch scale which allows a lot better net positioning in the Gibson Les Paul . You also have chrome hardware that really sets off the black paint job throughout the body and the neck.

This guitar has a great sound it's a very Gibson ask sound but it has its own thing going on compared to Gibson Les Paul. It has a more driving and focused tone then the Gibson Les Paul but doesn't carry the weight in tone as far thickness as a Gibson Les Paul. This is a tone nice to be a little bit thinner but it's still going to have that warm feeling because the mahogany wood throughout the guitars body and neck. Match this guitar up with a martial plaque seeing you have AC/DC tones all day long. This guitar also sounds great in any high gain amp application.

These guitars are fairly expensive compared to a lot of guitars out there. At new they come in right around $2200 which is a great price for Gibson SG guitar. They sound great. They're perfect for digging and they're perfect for any type of recording session that you might be in. I have used to Gibson SG in mini recording sessions as it has a great tone for the recording application. I recommend a Gibson SG to anyone who wants a alternative version of the Gibson Les Paul or maybe a slightly different tone and probably a little bit more versatility than the Gibson Les Paul.
Did you find this review helpful?yesno
»

gromeul's review (This content has been automatically translated from French)

Gibson '61 SG Reissue
5
Made in the USA March 3, 2005 Nashville prcis to be!
Mahogany body a pice.
Mahogany one pice, 22 frets, 2 pickups classic 57 '.
Vibrato bridge "Vibrolance" (no engraving / logo on the pack ropes ...), stop-bar comes with the guitar.
1 Volume / Tone for micro, slecteur 3 positions.
Channel broad-section "D" plutt that "C".
Mcaniques the original have been replaced by Grover.

The handle is enjoyable trs, Access in acute is what is best in current production (except for the Parker Fly), weight is measured ergonomics practice even if the rod is dropped to the level of vibrato slecteur. Like any self-respecting SG, the head tends "fall" (sitting mostly).
The sound is Rock, Blues and all the drives, the trs good!
Surprisingly enough, the vibrato (Bigsby purpose in mind) is good agreement, without the guitar dsaccorder Fawn catastrophic!

As I try to play all, it is appropriate that I approach all music but its record is still Rock / Blues. Branch in my head and cabinet Koch 2 * 12 'is a rgal!
The sound is less fat than a Les Paul and the middle position, playing with the volumes, we can almost have a funky sound!

I for 1 week, bought used (some scratches from use) with the flight case on eBay in 1100 fees included, it's not a bad deal I think when I see the new price! I possd a white SG dated 67/68 that I sold (I'm stupid ...) and I always regret the damage is (partly) rpar Now!