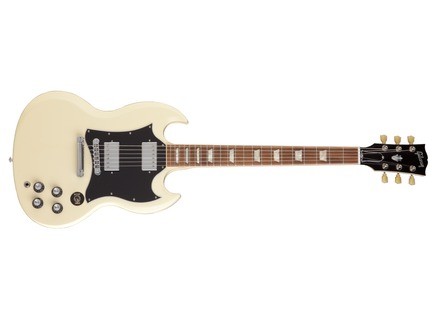 Gibson SG Standard Limited
4
Gibson is reissuing this guitar again for 2011. It is the SG Standard in Natural Burst. It has a very 70s look to it with this finish and it is pretty cool. Other than the limited edition finish it is pretty much a normal SG Standard. The SG is the younger brother of the Les Paul and it has some improvements and somethings people dont like. The SG has a flat mahogany body with a set mahogany neck. The body has 2 deep cutaways for the neck so you get much better upper fret access. The neck is mahogany with a rosewood fretboard. The fretboard has 22 frets. Up top are standard Gibson tuners with a standard tune-o-matic bridge. This is based off of a later SG so you have the bigger pickguard. The pickups are standard Gibson. The controls are standard as well with a volume and tone for each pickup and a 3 way toggle.

This SG has a very familiar feel to it. It feels like an SG standard, no surprise there. If you like SG's this is a good thing if you do not like SG's move along. The neck is pretty nice and has a slimmer profile. The upper fret access is good like in most every SG guitar. The flat top gives you a different feel than other Gibsons. I prefer the feel of an arch top guitar. The neck is placed far out of the body so you get a kind of neck heavy feel which I do not like. This is a common problem on SG guitars.

The sound on this guitar is Standard SG as well. The SG has a kind of unique tone of its own. It doesnt have a maple top so the body is all mahogany but it is quite a bit thinner than a les Paul so it has more of crisper tone. I am not a fan of these pickups. I believe its the 500t and the 498r something like that. These are the generic pickups Gibson uses nowadays. They have a more modern tone to them which I feel is not very Gibson like. It is a hotter pickup so it is more based around classic rock tones. I guess Gibson wants the guitar to sound like what people hear on the radio. I would prefer if they put their Classic 57s in all their guitars. That pickup is one of the best modern PAF's on the market but they only put it in their higher end guitars.

If you are looking for an SG usually your color choices are pretty slim. Its mostly red and black. I think this is one of the reasons why the SG isnt that popular a model. There isnt much variety within the line. With this guitar you can get something different and get a real 70s feel with your SG. If you are a devoted SG player this guitar has the same feel and sound that you love just with a new old school look.
Did you find this review helpful?yesno
»

Gibson SG Standard Limited
5
The Gibson SG is a fantastic sounding and also looking guitar. It isn't very iconic and easily recognizable guitar due to its double horn body shape with its double cut out of the body. It takes a lot of influence from the Gibson Les Paul guitar and when its first inception and manufacturing it used to have the Les Paul name attached to the guitar. Well the real man Les Paul didn't like this guitar very much so he wanted his name removed from these guitars. These guitars are very easily associated with many hard rock guitar ask such as AC DC and peter Townsend. They have a great sound very unique to themselves but also taking some influence from the Gibson Les Paul. Devastator body overall and they have a longer scale length. What is great about these guitars or Ruby Gibson Les Paul is there very easy approach to reaching D higher frets. You're able to solo and reach the higher fret studios cut out of the body and a thinner body whereas it would be very difficult to reach the higher frets any Gibson Les Paul guitar.

This guitar as a great town in overalls very easy to use. The fretboard is little different than the Gibson Les Paul as it seems a little bit wider and its overall feel but the scale length has probably the most attribution to you that overall feeling of the guitar.

The guitar itself has a mahogany body and mahogany neck with the Rosewood fretboard. You have to humbuckers installed with a normal volume for each pick up and tone not preach pick up.

I love the guitar sound in a hard rock environment. So when you put it in front of a good high gain amplifier such as a marshall amplifier or a Mesa boogie amplifier to you can get a really good solid hard rock tone. The tone itself or voicing itself is a little thinner than the Gibson Les Paul but it seems to be a little bit more focused tone my opinion. When I say focused I mean Morris the attack overall just feels a little bit more present in your face my ears. Where the look Gibson Les Paul has an more warmer tone overall I think the Gibson SG has a more thinner tone because of its thinner body and laundromat seems to have a little bit more mid range frequencies in the overall voicing of the guitar.

These guitar sound really good and probably even better than to get some Les Paul in a clean amp setting. Because it has a center tone it lends itself to play clean music a lot easier. I really like recording with this guitar and playing any gig with this guitar. It's a great for any digging musician. It's a very versatile guitar and complain just about any genre of music.

I highly recommend this guitar and anyone is looking for a good rocking digging and recording guitar. It's extremely versatile as a great feeling and great tone overall. They are a players guitar and not a boutique or showroom guitar. This is a guitar meant to be rocked out and played and abused hard. You can find these on the classifieds or the forum classifieds pretty easily. I've seen them as low as $1100 for this guitar so which is a great price for this particular guitar. I highly recommend this to anyone looking for a great digging recording guitar. It has a good overall tone and the versatility is exceptional.
Did you find this review helpful?yesno
»

ff_07's review (This content has been automatically translated from French)

Gibson SG Standard Limited
5
Did you find this review helpful?yesno
»

sylvestre99's review (This content has been automatically translated from French)

Gibson SG Standard Limited
nothing more to say that in other reviews, if so, is that this newer model the key is made in a wood fired (I do not remember which). Having owned older models with a rosewood fingerboard, I can say that there is no difference in the sound made between the two. So totally satisfactory.
At the microphones, I changed the 490/498 for original classic 57 ', not that the original pickups are bad, but I'm used to classic 57, and I now all my team guitars. The sound is of course fabulous!

comfort game is THE highlight of this guitar. Originally I'm rather fond of Les Paul. But we must admit that repeats or in concert, lightness, balance and the handle of the SG are exceptional. When you start playing this guitar, you can not stop as it is fun to play! The one who brought me here this effect is the Telecaster. Plunging head is confusing at first (especially when coming from the les paul), but you get used to very quickly, and it was not a problem quickly.

We go there in the subjective. Personally, I find the exceptional and perfect sound, because it is exactly what I expect of a guitar. I will scream against the common places that want:
- It sounds like ACDC
- Clear sound is bad
- ...
I remain convinced that those who write it do so only by conformity, and that difficulties because they read it elsewhere. Let me be clear: we can all play with any guitar!
Indeed, the SG will excel in the ACDC sounds, but I have a standard and paul Epiphone sheraton which are equally excellent in the register, I had a telecaster which was also very good, you just adjust the amp on!
Personally I find this extremely versatile guitar, and even though I play mostly heavy rock that spot, I can cover all styles avec.Mais course, I'm not trying to sound "like so and so", I turn to my all styles way, and this guitar is perfect for that.
Similarly, intermediate position, or on the neck pickup, rendering its clear in my excellent taste.

This guitar satisfies me! I laugh when I read comments like "mine is 19X, time or making was exceptional, nothing to do with the current crap." The guys who write it have never played on the stuff they are talking about and simply relay stupid platitudes that can be read on all forums. I'm a fan of Gibson, and I bought / sold a considerable number. I have all purchased by small ad without having tried first for most. I had recent, old, all models and all eras. And quite frankly, I've never been disappointed, and I never noticed any significant difference in quality between the different models. After, one is never safe from a defective model, regardless of the make and year.
In short, if you are comfortable with his Gibson, and especially with the ergonomics of the SG, this guitar is perfect, you can do everything with.