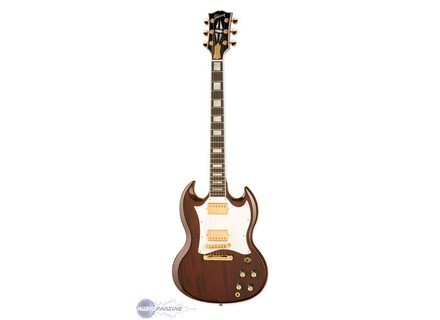 It has to comes with two hum pick ups into volume control knobs into tone control knobs. Overall the basic electrical features are pretty much all of the same as any get some Les Paul guitar. The neck is a little longer and the radius of the fretboard is a little bit flatter then it gets Les Paul guitar. So you have a little bit different field across the neck. With the cut out of the body on this guitar you are able to play the higher frets a lot easier than you would the Gibson Les Paul guitar. So that makes it a lot better for soloing and racing in the higher frets.


This is a very easy guitar to use & get a great tone from. If you're playing with a high gain amplifier then you're going to get some great big juicy tones especially because this guitar features mahogany wood on the body in mahogany wood in the neck. You get rosewood fretboard so that allows to balance out the thickness of the guitar tone a lot better. This is a great guitar for playing cleans with as well which is a more versatile than the Gibson Les Paul guitar. Since the tone is a little thinner if you're playing with a clean amplifier you didn't get more chime and sparkle than you would with the Gibson Les Paul guitar.

I think this has a lot more versatility than the Gibson Les Paul and the soul and tone is still in tact. You can pretty much play any music that you would play with a Gibson Les Paul guitar as you would this Gibson SG guitar. It's pretty hand-in-hand with the type of music that you would play however I think you have a little bit better versatility with this guitar primarily because of the clean application that the voicing of this guitar.


I highly recommend this guitar to anyone is looking for a solid players guitar for recording or gigging. You can find these guitars in the used section all day long. And you can pretty much find them in just about any guitar shop or retailer in the world. Not sure what the going rate is for this particular Custom guitar but the SG's are all over the place.