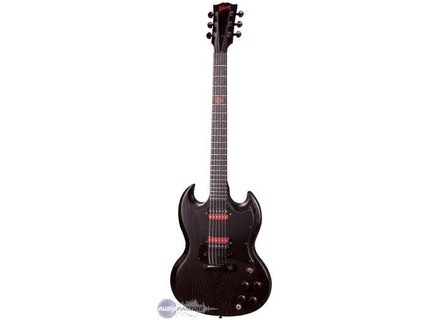 SG Voodoo, SG-Shaped Guitar from Gibson in the SG series.

Gibson SG Voodoo
5
Looking for a good (great) guitar I browsed shops here in Dublin, Ireland. Overpriced and without the case over here I bought it off Soundslive.co.uk for 1200 Euro. Dont know how much in Sterling or Dollars. Expensive you might say, but the price is little compared to what you get, and the case is cool too.

Initially I thought it may be like other SG's I'd tried, but it was different. In my opinion, better, other folk may dislike it, anyway. The humbuckers on it appealed to me unlike the other ones I'd tried out. The action is also very well set, not pressing down too hard and snapping your fingers off is a bonus. The look of it is also very slick, the red and black work so well on the SG. Also, not heavy, a big bonus. The Voodoo skull also adds a good, unique quality to it. And even though it only has side markers on the fingerboard you can still find your way around it.

There's not much I don't like as such. The part of the body where it rubs against my shirt is causing the finish on it to wear off, but that's repairable!

Built to last. The glued in construction of the neck makes this guitar built to last. I wouldn't ever feel the need to bring a spare to a gig with me.

This guitar has it all. Looks, screams like an angel, and is built to last. A sound investment!

Gibson SG Voodoo
5
I bought from a guitar company from wisconsin, it was about $800.

the pick ups kick ass. They are really clean and bright, but also can create a very clean deep sound. The shape is the only shape i have ever liked, the color is sweet, its amazingly light, and for shits sake, ITS A GIBSON!

a modern masterpiece. The look is good and it is sturdier than shit, ITS A GIBSON!

Its looks cool and it has the same thing on it as the regular sg's but with a cooler look. Thats what got me into that. I just wanted to try it out but after playing with it for a month i loved. Its also really light.

Well......nothing really. Its a great guitar.

Gibson made it, so you can bet it has a 5 star build to it.

IT gave me hours of enjoyable time. Its great for metal or speed metal. The look got me the most. I have numerous of Gibsons and Jacksons. And this had to go with my collection. If you thinking of buying a Gibson and you like rock or metal the SG voodoo is right for you.

Gibson SG Voodoo
4
A lot of people confuse these guitars with the Gibson Gothic series. It took me a while to figure out why these guitars look the way they do. I guess Gibson is trying to associate the swamp in swamp ash with Louisiana voodoo stuff. This guitar is just an SG made with a swamp ash body and a mahogany neck. It has an ebony fingerboard with red pearl Voodoo skull at the 5th fret, black chrome hardware and Black Magic pickups like all the other voodoo guitars. Swamp ash is lighter than mahogany and if it is good it will have a really clear sound. The quality of swamp ash depends on where it is taken from on the tree. Two Ash bodies are more likely to sound more different from one another, whereas Basswood and Alder are more consistent. A heavier piece, or a piece from higher up on the tree will be more dead and lifeless. More dull sounding, because the wood is harder and more uniformly dense. So the sweetness of the soft open pores is gone, and left is the compressed sound of a rigid, non-responsive wood, without all the brightness and sustain of a harder wood or the openness of a softer wood. The finish on these guitars are pretty cool. It has a thin black finish with red rubbed into the ridges of the wood.

As I said earlier the tone of a swamp ash guitar can vary greatly. A good one like this will have a slightly brighter sound than mahogany. It will have more clarity on the top end. The bright nature of the wood makes the guitar good for down tuning. you can retain your clarity with low tunings with the brightness of the wood. If the quality of wood is not good your guitar will not sound good. The qualify of swamp ash can vary greatly. It will not be as bright and will sound like a dull piece of wood. A good peice of swamp ash will be lighter and sound brighter than a bad piece which will feel heavier and sound duller.

Its nice to see Gibson trying out different woods but the color scheme on this guitar is pretty rediculous. I dont think people looking for a nice swamp ash Gibson are going to want a pink skull inlay on the 5th fret. I can live with the red in the wood and the pickups can be changed, but the inlay is pretty much a deal breaker. Which is a shame because this guitar sounds really good.
Did you find this review helpful?yesno
»
Read the 7 user reviews on the Gibson SG Voodoo »