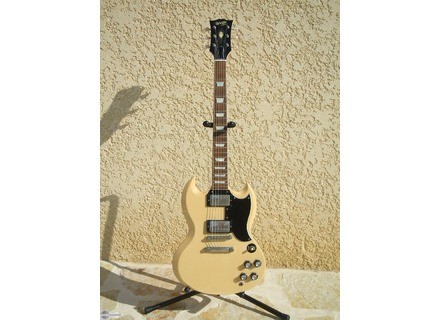 Orville SG '61 Reissue
5
SG Reissue Type 61 heritage cherry finish (Vintage Red), 3-piece mahogany body, mahogany neck rosewood fingerboard. Vintage mechanical and standard fittings for SG. The pickups are not original. I do not have (yet) identified but they are excellent.
The handle is about 60 by 50. Short, it is a real SG, in the canons of what a vintage or reissue SG. The knobs are against the original, and it feels ... Well, it&#39;s okay, it does not spit, and it&#39;s not bad. Replacement well worth the cost of this guitar.

The handle is not to my taste, a hair too wide (42mm at nut, below current ribs), I like roundness any vintage, which influences the sound of this guitar more than another, for the thinness of his body. I have a Burny SG in the late 70&#39;s, with a width of 39mm at the nut and an ultra slim leg, the same as Angus Young.

Access to acute issue, the SG remains just top notch, it is even confusing, even compared to a Flying V. It just has never been better, at least for those who play thumb over the handle.

The guitar looks a little conventional for SG. This is the price to pay for some fat provided by the handle (my Burny is less oily and less prone to "itchy head"). The guitar is very light (the lightest of the contract). In short, what is expected of a good SG.

In short, no surprise, it is a SG with these advantages (weight, access to acute), its inherent flaws (balance, electronic not top notch). This is very good, but as this notice must also be a bit subjective, I regret the neck profile, I would have an alternative, something different, but it remains at Gibson. So, I put 7, even if objectively it is at least 8.

We&#39;ll have that I can identify these pickups because this guitar is ... a pure killer! It was the body, and at the same time attack, vaguely "twangy" own that must be a good SG. If you want a Les Paul lighter and less greasy, the Flying V or Explorer are better shown. SG, she has something of her own. This is the same family, the bird does not fall far from the nest, but offers much more air and nervousness in the sound, otherwise than would a 335 for example.

Of course, the good benchmark is the sound of Angus Young, but Derek Trucks, Zal Cleminson (Sensational Alex Harvey Band), Tony Iommi and Eric Clapton with Cream (compare with the Les Paul album "Beano") . In short, anyway, if you look at reviews on SG Orville is that you know the beast. And you will probably return to the current prod Gibson ...

So, how to say ... was the body. Something that owners of SG Faded (I was) can not understand. The sound is balanced, with nervousness, but the typical foundation of his gibson, this grain, his attack when a bend or, let&#39;s be crazy, a double-bend. SG is not a beast cleans sounds, but very present in the wood, allow some "funkeries", plans chicken-picking, slide. As soon as one engages in the crunch, BB King and Freddie rappliquent was bite in lead with the right amount of soft, silky. Intermediate position, it has everything that you need for a good pump bluesy Texas sauce and other country plans. In the neck position, gaining sweetness, perfect for the intimate blues. In saturax, take the measure of this guitar ... a dynamic incredible game, every nuance is faithfully transcribed, the sound of A to Z mastery of chord tawngy full lead just by assaying its attack. Direct it to one kind of music and especially his (putting a typed microphone kit) would be a crime, because this guitar is generous, expressive, organic.

I know that there are two camps, more or less "fundamentalist" pro and anti Made in Japan. It is true that there is sometimes a bit of snobbery, I happened to fall on Japanese not particularly interesting or overvalued. I played on Gibson (Les Paul Standard 95 Les Paul Gary Moore Signature, Faded SG, SG Standard 94 and 61 RI 2002) but also on the Jap (Bacchus Duke Standard, Tokai Love Rock 95 Orville Les Paul Standard, Orville Flying V 67 and Burny SG in the late 70s). I&#39;m not a big fan of Tokai, yet better than most of the current Gibson, pretty close to what was Gibson in the 90s (better finish). For Bacchus, I let you see me, it&#39;s a Les Paul a little typical, but whose qualities put a slap in the prod Nashville. Burny is a good alternative to Tokai, we remain in the midrange that said, but with a great value for money.

Orville was part of the Gibson house, for the Japanese market with made in Japan (because they are protectionist our Japanese friends). So no surprise to grip, in terms of sound, it was proposed that more or less Gibson in the 90s, albeit with profiles handle and a different email. As my Orville Les Paul would not have had the upper hand on a Gibson 90&#39;s, as the SG is really extraordinary. It can compete without blushing with any reissue Gibson sold 3 times more expensive. Maybe I was lucky to come across a model that has really aged well, the fact is that I feel I have made the deal of the century. SG is the last upset me (and I narrowly missed ...) is a 1967 SG Special which had more comfort handle that I love (narrow round). Feeling that I have not found on other similar models from the same era.

In short, for me it&#39;s a great guitar, absolutely. And because it can compete with U.S. models given to high-end, I would say it has, in addition, an amazing value price. Even if you change the pickups, this guitar worth looking for a SG worthy of the name, the test of time and at a nice price. It is suddenly a good step up from what may propose Tokai (upscale), above my Burny (though I love), I only see Bacchus to compete in the MIJ. I&#39;m crazy!