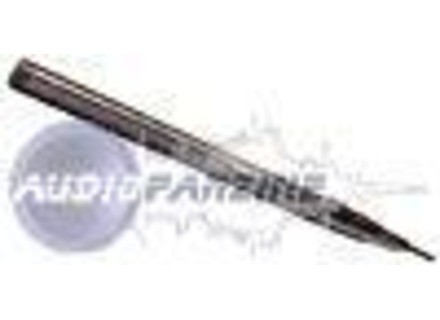 Buy this productView price information >
View other reviews for this product:
The Sennheiser MKH 416 is a shot gun tube microphone that can be used for a number of applications. While shot gun microphones are mostly used for recording audio for film, I've got experience using this microphone in a traditional recording studio setting. I'm sure that my positive experience with this microphone in the studio will translate to any application that you decide to use this microphone for. The MKH 416 has a frequency response ranging from 40 Hz to 20 kHz. The pick up pattern is unique because it has a hyper cardioid pick up pattern at low and mid low frequencies and at about 2 kHz it has a lobar pick up pattern, which is directional and is only found in shot gun mics. The mic is designed for use in the field, but can be used in any situation.

Having used the Sennheiser MKH 416 in the recording studio for recording the voice and room sounds for the most part, it's definitely a microphone that I'd recommend. It's got a very high sensitivity, so while it's best for use to pick up sound for films or room sounds in the recording studio, it also works well for speech as I've found that you can get a very realistic sound when hung over any sort of voice recording. While it's probably not traditionally used in a recording studio, the studio I work at has one on hand for many different purposes, but mostly for use in some degree with post production for film. The mic isn't all that cheap, but also isn't too expensive for a shot gun microphone of this quality. I wouldn't recommend it for musical purposes, but if you are looking for a shot gun mic for audio in film and/or for post production, this is definitely a microphone to keep in mind when shopping around. While I don't know much about audio recording for film, having heard this microphone in the studio it's definitely easy to tell that it sounds great when used right...
Did you find this review helpful?yesno