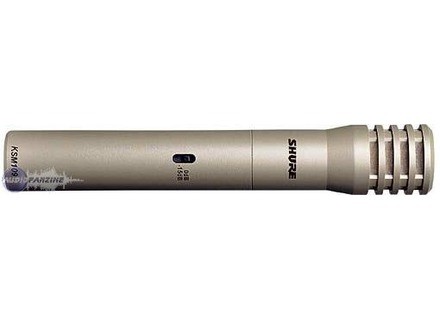 All user reviews for the Shure KSM109

Shure KSM109
For using this mic as an up close vocal mic, put it on the (0) gain setting...work the mic to achieve the desired presence...and don't forget to adjust your EQ for max clarity. I didn't like the wind screen that came with the mic, so I got a different kind that is smaller...works great.

The Shure KSM109 is fantastic for bass vocals in gospel music, if you use it properly. It really gives the lower frequencies a great deal of presence. When I hit a low D or C, the combination of this mic and my subs will rattle the rafters in most churches.
Did you find this review helpful?yesno

Shure KSM109
3
This is one of Shure's relatively newer KSM series mics. These are meant to be nice studio mics. Shure made a sliding scale for the different mic types, and these are the entry level small diaphragm condensers. I have used all 3 of the types, and there are definitely noticeable differences. This one really just doesn't sound as good as its older brothers, the KSM 137, and the KSM 141. This one also lacks a couple features. What it does have a is a small diaphragm capsule, which is going to give this mic an advantage in transient response and high frequency reproduction. This mic does better with those tasks than most large diaphragm mics do, so for the more sensitive instruments you'll want to record, you will do well with one of these. They also work great in a pair for stereo recording. There is a -15dB pad on these mics, in case you are miking up something very loud and want to avoid distortion. They connect with an XLR cable, and they do need phantom power to work. They don't have a low-cut roll-off filter switch unfortunately, so you may need to use some EQ after recording something with one of these. The pickup pattern on these is cardioid, and it is a very tight cardioid. To my ears it really sounds more like hyper-cardioid.

I used to have a pair of these for a couple years, but I pretty much never used them because I also had a pair of the KSM 137's, and of the KSM 141's. The other mics sound better in almost every application, and they have more features. If you can afford it, I would really suggest saving the extra money to get the 141's. Overall though, these really are not bad, on the contrary they sound fairly good, but the 141's are just superior. The 109's are pretty cheap though, so they are a good value. I wouldn't get them again, but I would recommend them to someone on a tight budget.
Did you find this review helpful?yesno
Cookies help us improve performance, enhance user experience and deliver our services. By using our services, you agree to our use of cookies. Find out more.