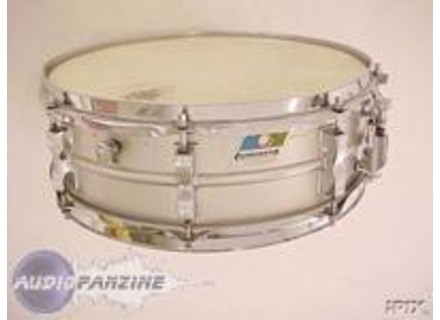 nexium's review (This content has been automatically translated from French)

Ludwig Drums Aluminum Acrolite
5
When playing on the snare we trs surprised by the sound, one word comes to mind: original! It does not sound like it is .... mtal trslgre.
Surprise I tell you! I tried several skins: remo pinstripe, remo and evans genera dry Embassador: the dernire as I think best suited but it is just about got! All while giving a dimension that is diffrent acrolite Ludwig.
This is a good quality price!

Dble K's review (This content has been automatically translated from French)

Ludwig Drums Aluminum Acrolite
4
Personally I play on the snare drum for a short time the loan with a friend, and the refurbishing, I appercu it was thirty years old! (November 1970)
I find the sound trs enjoyable, powerful, even in the ghost-notes, trslgre. I played on a sony emory signature yam before, I swear by my ptite Ludwig Now! Try it!

samnorindr's review (This content has been automatically translated from French)

Ludwig Drums Aluminum Acrolite
5
Prs 20 years since the snare followed me in the clubs. She's a sweet and trs trs surprising between wood and metal. Extrmenent versatile, it fits all styles of music (Jazz, Bossa / Samba, Latin, Afro Cuban and blues Rythmn and Blues, Pop / Rock ...). She is strong and lightweight trs (that of aluminum) and Systm stamp trs simple rgler allows good precision in finding the grain.
Indniablement, this snare has a great value qualitprix, a superb projection (you'd be surprised by the power that can DGIG the snare) combining power, precision and fine grain stamp, finesse and sensitivity nuances, Ludwig is a what? For me, Ludwig is one of the queens of the brands that account in the snare. I also buy from a supermarket (also amricaine little known brand and distribution in France) Saddle because I was looking more and more harmonic depth.
I would do with the exprience without a doubt the same choice.

kanardrum's review (This content has been automatically translated from French)

Ludwig Drums Aluminum Acrolite
4
I use it for a week I had to order it in the United States as found in the hexagon. This snare drum is 30 years old so the sound it gives off can really be a good condition to be prepared to spend a lot of time to the rules and pampered, get to know and do not hesitate to remove the screwdriver when necessary. Once tamed it becomes a weapon of mass destruction, I tried a lot of metal snare before purchasing this one and never had I felt such a presence, even in the middle of two guitars and a bass saturated a wish she knows to be respected and heard, maybe this is it aluminum effect. In any case it adapts to different types of skin tones according to him is, she was not at all the same way of singing with Remo Emperor X was the first drum head that I tried aquarian response and II. You may say that this difference is normal and it's true but still more pronounced than on the snare today for my taste.
Basically it is a snare fundamentally good but can not be fully expressed with a fine-tuning of the voltages of skin, a 1 / 8 of a turn key ready you can lose the superb sound that has just finally to find the grant is a challenge but once the result is a record up to expectations. For the sonic potential it holds I think the price is not excessive.
And I would tell you when I would have definitely tamed if it's the choice I would do but for now I do not regret my purchase.

Did you find this review helpful?yesno
»
Read the 5 user reviews on the Ludwig Drums Aluminum Acrolite »