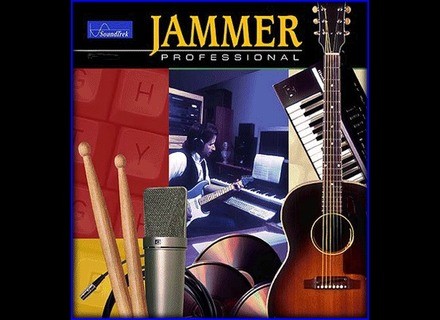 We choose a group style (rock, pop, folk, ...) and part (intro, groove, break, ending) and there are usually 4/5 musicians attached to a set of measure. To change parties, it re-selects or group is copied from another part of the song.
Components are assembled as one complete.
Then it shows the chords, and play.
You can transpose, add / delete actions, parties, and especially touch style of each virtual musician.

Software extremely light (due to its age)
In my version, as of midday, no vst possible.
Possible export midi file

I've had at least 14 years and I occasionnelement reused.
To accompany him, he more or less equivalent to Band in a box.

To compose, I preferred at the time to BIAB, because you can manage the architecture of the piece as you want, add rolling drums, breaks, ...
Regarding styles, they are correct no more (my old version), but you can change styles and give directions to each game virtual musicians.

Otherwise I have a sequencer / arranger hard, yamaha QY100, which is not bad either and I have owned a roland pma5 (down)
These hards have much better styles.
Now this may have changed since 1998
Did you find this review helpful?yesno
»