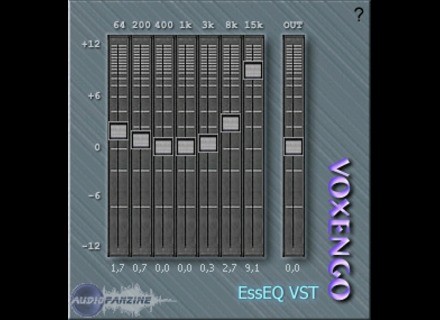 Voxengo EssEQ [Freeware]
4
Voxengo's EssEQ is a simple graphic equalizer plug-in that is available for free for PC computers that are able to run plug-ins in VST format. It's been a while since I've had this plug-in in my arsenal, so I don't remember too much about the installation process, but I don't remember having any problems getting started with it. You can download it straight from Voxengo's website, so as long as you've got the right platform to run the plug-in on, you should be all set. As far as the make up of the interface is concerned, it's generally pretty simple to understand. It's a simple seven band equalizer, that has a 12 db range high and low, where each band is set at a fixed frequency. It also has an overall output leveler. A manual won't be necessary under any circumstances, as this is as simple as they come.

Running the Voxengo EssEQ shouldn't present a problem for anyone, as it takes up a very low amount of processing power. I don't run the plug-in any more now that I have a Mac running Pro Tools, but when I did it was in Cubase SX and it was on a Hewlett Packard Pavilion dv8000 lap top with a 3.0 Ghz processor and 2 GB of RAM. I mostly ran it in Cubase SX 2.0, but later on I also ran it Cubase SX 3, although it's been a few years since I've ran it at all. In the time that I used it, I didn't ever try to max it out within my system, but whenever I wanted to run a few of them simultaneously, I was able to do it. Being that it's free, if you're at all interested you might as well try it for yourself.

While not the cleanest sounding or most versatile graphic equalizer, the Voxengo EssEQ plug-in is still worth having being that it's free. The frequency selection of the seven bands make it easy to do quick EQing jobs on the fly. While I can't say that I miss having this plug-in, it sounds decent enough that I'd still have it around if I had a compatible system. Those who are looking for free plug-ins, it's definitely at least worth giving the EssEQ a shot...
Did you find this review helpful?yesno
»