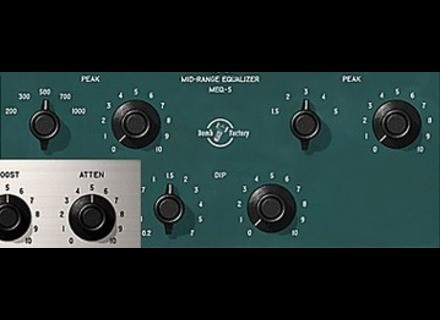 Bomb Factory Pultec MEQ-5
4
The Bomb Factory Pultec MEQ-5 is a mid range equalizer plug-in that is available within Bomb Factory's Pultec bundle. I'm not 100% sure if it's available as an individual plug-in or not, but I'm pretty sure you can only get it within the bundle. Also included in the bundle are the EQP-1A and EQH-2 equalizers. I wasn't involved with the installation process, as I don't own the full bundle myself and I'm only running the EQP-1A at home. The full bundle I've used at the studio where I'm working, so they had already taken care of installing it. The interface of the plug-in is pretty simple, even if you haven't used the original MEQ-5 or other Pultec hardware. It's basically got three different bands, with each of them having a parameter for setting the frequency and one for setting the gain. Two of the bands are for boosting, and one is for cutting. Each has a series of fixed frequencies to choose from. A manual shouldn't be necessary to learn how to use this plug-in.

The system that I've used the Bomb Factory Pultec MEQ-5 on is Pro Tools HD based, so all of the processing power is handled by this. Therefore, it's pretty rare that a plug-in will cause performance problems on our system, as is the case with most plug-in on an HD system. I can't say how well this plug-in would run on an LE system or something similar, but judging from using other Bomb Factory Pultec plug-ins in this setting, I think that as long as you have a decent enough system to currently run your DAW and plug-ins comfortably, this plug-in won't present you with any problems.

While I don't find it to be as useful in general as the EQP-1A, which is also included in the Pultech bundle, the Bomb Factory Pultec MEQ-5 is still a great EQ plug-in to have around for when you want to just affect the midrange (give or take) of a sound. It's fool proof to use and has a nice and clean sound. Having also used an original hardware MEQ-5, I can say that this comes nowhere close, but it's still a nice try as no one will ever be able to match that sort of sound in the box. The Bomb Factory Pultec bundle and the MEQ-5 are definitely helpful EQ plug-ins that are worth checking out for Pro Tools users.
Did you find this review helpful?yesno
»