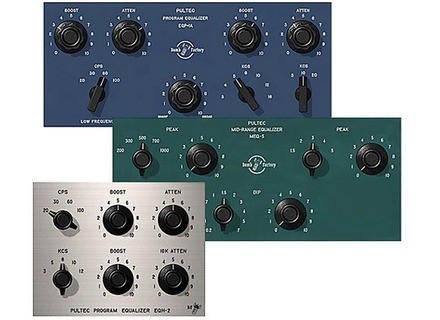 Bomb Factory Pultec Bundle
4
The Pultec Bundle by Bomb Factory has been one of the main equalizers that I have been using over the last two years. I have not had any compatibility issues when using it with Cubase, Reason, Ableton Live or FL Studio. No matter which computer or DAW I use it in it works great. It does come with a manual that is easy to read through if you need it but chances are you won’t need it because it is that easy to operate. All of the basic functions of the Pultec Bundle are easy to access and operate. Installing and setting up the Pultec Bundle was quick, I installed it on my Windows Vista 32 bit system and it was very smooth. It gave me zero troubles during the installation and worked great. It does not take up much CPU either.

In the Pultec Bundle you will get a few vintage style EQ’s, the Equalizer EQP-1A, the MEQ-5, and the EQH-2. Each one of these plug-ins are made to model after the real vintage products. I love using all of the EQ plug-ins on vocal tracks. Using the EQP-1A has really allowed me to take my engineering skills to the next level. My least favorite thing about these plug-ins is that if you run them multiple times on the same track in the same session it will start to eat your CPU. So running it simultaneously multiple times could cause you some issues depending on how fast your computer is.
Did you find this review helpful?yesno
»

Bomb Factory Pultec Bundle
5
The Bomb Factory Pultec Bundle is a set of three equalization plug-ins for Pro Tools. These plug-ins pay homage to the classic Pultec outboard equalizers that are generally considered some of the best ever made. In this plug-in bundle is the EQP-1A, which is the most well known Pultec, as well as the EQH-2 and the MEQ-5. I don't own this bundle at home, and I wasn't involved with installing it at the studio where I work. As far as the the learning curve of the plug-ins is concerned, they are really simple plug-ins and just about anyone should be able to figure out how to use them. They all share a similar kind of EQ make up, which is a configuration that has been copied many times over the years since the original Pultecs were made. A manual shouldn't be necessary unless you're having some sort of a technical issue.

The studio that I'm currently working at has the Bomb Factory Pultec Bundle on a few different systems. We have a number of different studios on site, so we have our plug-ins running on a few different Pro Tools systems. All of our rigs are Pro Tools HD based, so running these plug-ins is never an issue. Even if you were running them on an LE system I would think that you'd be okay as they really don't seem to take up too much processing power. It really all depends on your personal system, but as long as you're currently able to run some plug-ins without a problem I would think you'd be okay here.

The Bomb Factory Pultec Bundle is a great little EQ bundle to have around. These certainly don't sound anything like a real Pultec, but just having their make up makes them easy to use. They aren't the most versatile equalizers, but anyone who has used a Pultec or an EQ with a Pultec make up will know that this isn't the strong suit of these EQs. They are great for doing simple jobs and for getting a quick boost or attenuation a certain frequency quickly. These plug-ins are pretty clean sounding but again, definitely don't expect them to be anything like a real Pultec in terms of tone. If you're looking for an inexpensive way to get some easy to use EQs in your Pro Tools DAW, the Bomb Factory Pultec Bundle is definitely worth trying out.
Did you find this review helpful?yesno
»