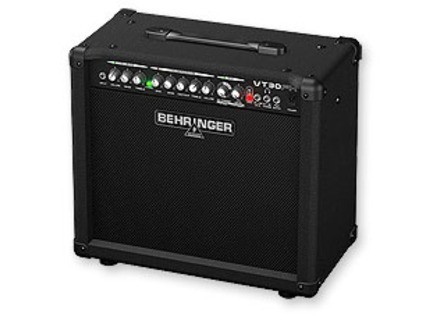 Johnny R's review (This content has been automatically translated from French)" Worth the money, nothing more ......"

Extremely simple configuration, amber manual (but virtually useless), yes, we easily get a "good" sound, in line with the price of the unit.

On the exterior, it's not bad. The Tolex is very thick and looks very solid, corners are plastic, but a thick plastic and not brittle, There are four good rubber feet.

However, the knobs are VERY cheap ..... they play, are hard to turn, it does not inspire confidence at all.

Tried with Epi Les Paul with Wilkinson pickups and a 77 LB Custom Dimarzio Super Distortion with.

Honestly, the sound is not bad at all ...... especially clean .....
The "Hybrid" brings a real plus, it must be recognized. It has a noticeable difference between with / without.
You really get a good clean "slamming" and dynamic, just like a good tube amp.

Saturated channel: Ouchhhh! is aggressive! too aggressive! beyond 2 on the gain knob, this is madness! and treble ...... 10 times too much treble! yet it is not an amp for playing the "metal trash kills" ...... weird ..... it's a pity that when all this is still using the settings saturated sound is very convincing ..... but suddenly we are left with unusable settings on 3/4 of their race, especially for gain and treble ...... shame.

I do not understand the 'political' Behringer ..... why not sell this amp 200 euros (instead of 125), but without defects?
it makes me think of the typical Harley Benton amps sold by Thomann, and I would not be surprised to come out of the same factory ..... it really looks sloppy manufacturing .....

Ok, this is guaranteed 3 years ...... I think HP did not take three years, since he took the boxes to the ignition! After maybe I came across a faulty model, but this kind of symptom, I met all the "cheap" amps that I tested out of curiosity .....

So it's a good amp "beginner" it sounds pretty good, but the quality of the electronic = zero. I smell a trick that will messing around in a few months ......
It's disposable ...... what a shame, I like Behringer, but there .....