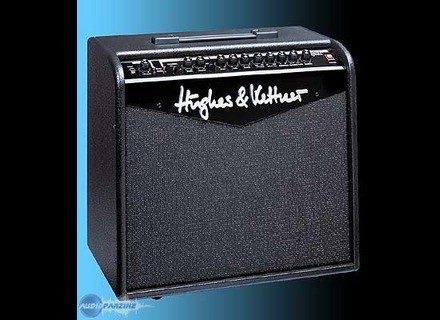 Easy OF USE not need a Ph.D. to get a sound of this amp

My style of music being the heavy metal I quickly deu t by distortion (too runny, not too prcis and neutral) I jou it with a epiphone les paul standard equipped with a EMG 60 and 81.
clean by the cons proves satisfactory and the 12 "Celestion restitution good sound.
the effect when they begin to be depasss by technological advances that make some brands at the moment and yes times are changing. trs even when there are still a shame that the bottom bracket is optional.

I have bought used and I jou on for 1 year I had the amp at the time but I just before a peavey lamps. but this little amp compact DPAN me well and never BRONCH panda rpetitions despite its power. I recommend it for that dbutent scratch with a group home but not for the research confirmed the big sound.
Did you find this review helpful?yesno
»

Speaks for itself really, but:
EQ common to both channels, always a bit tricky, the best compromise being pushed fairly clean (easy having the master volume) like that the bass plays everywhere.&nbsp;

It's messed up, setting common rates of reverb and delay, thus impossible to have a beautiful reverb without the delay too hard on the other channel, I don't know what they were thinking in HK.
Especially the chorus can not be combined with another effect, which makes it unattractive in fact (a bit dry).

We can catch up with the outer loop course, which goes against the concept all-in-one put forward by the mark at the time.

The first effect, the reverb is nice (especially strong set) and not too long, though.
The delay is adjustable in rate / time / feedback and sounds quite round, saturax really enjoyable too.
The chorus is almost analog but too little and too dry adjustable by itself.

The clean is very interesting because you can set it hard to be just at the limit of overdrive, warm and clear, a funky delight. At the bottom is already using the bluesy guitar, nice versatility.

Saturax the normal mode is a pretty overdrive, open and bold, not bad at all. In Mode more, it's hard rock with a really nice grain pretty catchy. I had the tube factor, well it is not really better than the triplex in the end, one feels a strong family resemblance there.

Interestingly, the drive channel at the very least clean, more enveloped the clean channel, and both behave very well with an external distortion pedal which is not very common. So we can make 6 sounds (disto disto-drive clean reverb and delay all variants) with a simple foot pedal, loud!

In general as long as we do not push too much the overall volume this amp sounds noble and refined, amazing.
When you push the master, on the transistor side they come back in force and I don't like it &nbsp;(too harsh acid-inaccurate), but attention- it is already too strong for super ears eh. Play a little less strong and transplanting the amp is a surer way to go.

I've had six months, I was curious.
It's quite endearing as an amp and honest in what we can expect, in fact it gives more than expected. The richness in detail is larger than the spider2 for example, and responsive to touch.
Here, transplanted to practice sessions and concerts, and as such at home or pub gig / small room is perfect we get on well through this amp.

And I'm dingo of delay, need not lift me I'm naked (ah, yes I am blushing)!

The Triplex was costing about 600 euros at the time, it is very well built. I would say that around 200 euros in good condition is a good second hand given its sound qualities.