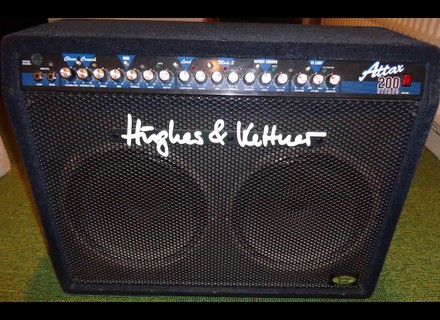 STEPHTRUC's review (This content has been automatically translated from French)

Super simple settings. Its clear okay with nice reverb as well. For crunch Not bad for the blues, the distortion is terrible gulp fat hyper, for rock n roll that oats severe.

I play rock ab stray cats in the genus, it does its taf, c is weighted in other punk rock'n'roll it unfolds and sending the ball with a fat distortion and especially that of the body. I play it with my gretsch power jet and my gibson les paul custom classic.

I 'bought for a handful of euros 80 balls Cygnus. J is really a matter of one more hp was changed by a vintage 30 with another hp of origin rockerdrive c is really terrible, I advise you to do the same. In other amps I have had a jcm 900, a peavey 5150, a blackstar club, peavey 112, right now I only play on attax. For the price I unfortunately do not you do the same thing as I think, but even more expensive do not recommend this amp is really effective.

Hughes & Kettner Attax 200 Stereo
4
-What kind of amplification (lamp, transistor, ...)?
Amplification Hybrid.
As often in reviews, the great anything is said by users. So it is not an amp transo, but what is called a hybrid. This type of amplifier was first introduced by Marshall Valvestate series with her. The principle is simple: Preamp lamp, power amp transos.
In the case of ATTAX series is the same as in the Marshall preamp lamp is operated on the crunch and lead tones, the clean is actually completely "solid state".

-What is the power delivered?
Again, it's great nawak. The ATTAX 200 200Watts but not developed ... 2x100Watts ... How does the same thing? Of course not. It is a dual 100W amp. It grows a little stronger than a normal 100W, certainly, but it never made 200W. To better understand the word "amp" with the word "bulb". Put a 100W light bulb in your chandelier. You will have the brightness of a 100W bulb. Now, add a second 100W light bulb in your chandelier. It illuminates stronger, certainly, but it does not always light up as one 200W bulb. Ben in the audio, it's the same.

-What connection?
Here, the sheet is more eloquent and more importantly, everyone has already described the thing.

-What are the settings, effects? ...
Ditto

-The configuration is it simple?
Such as any amp except that its interest lies in the stereo that implies in terms of wiring.
For the rest, it works like this.

-Gets it easy to sound good?
Yes, but like all amps, it has its own voicing that m ^ m it is relatively versatile, can not please everyone. That said, it remains a pioneer in its genre.

-Will it fit your style of music?
It's been a few years since I no longer use it, but at the time, I was completely satisfied and that for several years. But age helping, I ended up opting for a lighter solution.

-With what (s) guitar (s) / low (s) or effect (s) do you play?
The strato, the Ibanez superstrat diverse and varied. Side effects, a number of pedals for some pre-preamp and post-preamp side, I used several critters in Boss and Rocktron. It has always been very good on the stereo. If you've never used any effect on your stereo guitar sound, beware, you might not get over it. Reverbs, delay, chorus and take a scale impossible to forget then ...

-What kind of sound you get and with what settings ("crystalline", "bold", ....)?
The cleans are not really Fenderiens, but they do the job perfectly. The crunch have a small side medium not disgusting and are perfectly in style blues-rock. In rhythmic rock, it can bite m ^ m well. Lead side, there's also plenty to do thanks to a particular button "MODE2" voicing that offers a little more "heavy".

-How long have you been using?
Used for about 4 years.

-What is special that you like most and least?
The + is obviously the stere. I think he was the first to offer it outside the rack systems course.
The - uh ... Maybe so blue flocking carpet finish that is not great for maintenance and loses his long hair during the first month. They are found everywhere that shit here ...

-Did you try many other models before buying it?
At the time, no, not the masses but the stereo haunted me since the beginning. I do not understand why it was not the standard in guitar amplification.

-How would you rate quality / price ratio?
At the time when he was not given m ^ m, especially in hard head like mine. But it was not excessive.

-How would you rate quality / price ratio?
My needs have changed by now, but it is clear that I regret that this amp has given me many hours of enjoyment.

bilmobil's review (This content has been automatically translated from French)

Hughes & Kettner Attax 200 Stereo
4
-Transistor
-200 Watts
Double-connectivity (high and low)
-Settings are standart nothing extraodinnaire the above, in effect there are 3 "lead" available if there are the "crunch" as well as some quality fx

-Config is within the scope of any good amp to use simle there mm mini pedal to access leads to
-Very easy, if one considers that it yest for a guitar at least as al other end that goes without saying
Does not the manual inkiete

Ke-say my current style is rather accoustik c, so ...
-If I play with a "Les Paul standard" (gibson home), but this amp will sound great with the guitars more "modest" and will sound just as well with more guitars "better", I have also a multi-pedalier boss effects in the GT-6
C-amp is enough access to sound pure and clear blues solo and fatter on rythmic
-Sounds funky, bluesy for preferred without concession, after that for ke I hate if you must go the Juska it would rather the failure to recognize sound ki kel note you just play, like many home grassouille grassouille

I bought the about 10 years ago, it works very well tjrs, no worries over the
It is simple and if you wish to stay in clean sounds, it is very well
J-ke must admit that much, a couple of marshall and fender here and there without really stressed
-The quality / price argus, there is no hesitation when it is found that price was, honestly I find the argus severe
There a good chance

bidou88's review (This content has been automatically translated from French)

It is the transistor but good strong point on the power and the fact that it is in stereo, not least, believe me ...
I put 8 / 10 for the transistors (but not the same price either, you need to know what you want)

Configurtion very simple, I can not see how you crash, or from the time we know more or less use an amp, it's no more complicated than the others.
For what is there bah find her to take the time to play the scales and channels.
The manual it is useless, be rebel!

It suits me very bine to play more or less hard rock and blues (even when I precise that I prefer to rock).
I play it with my fender stratocaster lite ash (if I had the tps I will tell you all the good things about this guitar) and sometimes with a boss overdrive and a home crybaby.
I like the crunch channel that provides a distortion moderate, if not the leader I think we can afford to turn up the gain up to 7 or 8 but for (it's going up to 10) it starts to get too fat for me, even a bit messy.
The clear sound itself is not bad but I must admit that with a little overdrive boss gives a little color ca good fun rock.

Good strong points in summary: power and stereo without neglecting the quality of sound
Weakness: size and weight
J'i try a lot of transistor model (Fender frontman, MG marshall, peavey bandit ...) and I believe his pal does not figure even though the Marshel have some effect.

Level value for money euxxe frankly, look at what's new for you € 400 and you will see that the argus is ba frankly, I saw him in paris Pialle OCCAZ of around € 500 and if I was 400 € I will not hesitate.

Finally voila, wholesale kindly note if want to play in your room, go your way, if it is to play in a band having an amp that sounds good, with power without breaking the bank is that it's you.

Did you find this review helpful?yesno
»
Read the 5 user reviews on the Hughes & Kettner Attax 200 Stereo »