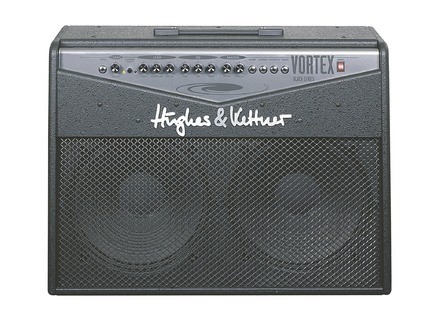 All user reviews for the Hughes & Kettner Vortex 212

Hughes & Kettner Vortex 212
3
Hughes and Kettner have some of the best sounding amplifiers on the planet. This a German company who designs high quality guitar amps for touring musicians and the average consumer. They guitar amps that range from just a few hundred dollars to several thousand.

If you need something with effects built in I would go for the matrix amps. They have the same style of voicing but with more channels and with effects built right into the heads and combos.
Did you find this review helpful?yesno

ApOKlips's review (This content has been automatically translated from French)

3-band EQ that influence each other (like on tube amps).

knob and finally a master volume.

No difficulties to adjust the amp, you get the sound you want in Triffouille a little change of distortion is stunning, we feel the difference.
Manual clear and precise, no need to dwell on it.

I play such important rock, and he comes out with flying colors.
I find the super clean (even on an electro-acoustic ca spring well).
We get a good range of sounds, for my part I am mostly a distortion of American, we can have a very hard distortion in moving towards the British.
I play it with a Hagstrom F20T.

I use it for 2 months.
What I like is the ability to change the type of distortion.
Quality / price ratio great for me who have bought used, no complaints.
This choice I would do without problems.
Did you find this review helpful?yesno
Cookies help us improve performance, enhance user experience and deliver our services. By using our services, you agree to our use of cookies. Find out more.