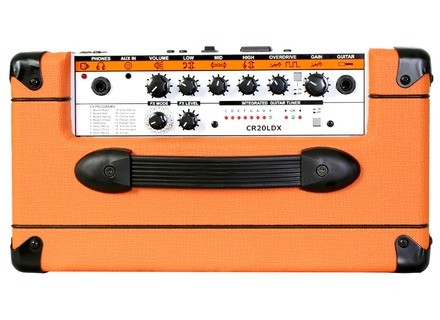 View other reviews for this product:
All transistor

So very complete and versatile equipment issue, at most we may regret not making footwitch like the cr35ldx, but it is not necessary to see Who is the CR20, rather to repeat at home!

very progressive power early in the race of the knob, powerful enough to operate in a difficult home environment as apart despite the 20w but not have to push a lot for the optimized (in contrast to amp 'tube)!


the manual simply explain the functionality of normal, if we used the traditional setting of a amp, no need to consult.

in short, good for a transistor, a body linked to the lack of hp 8 '
allows the gain to the bottom on one side a little bit crunchy
the fully actuated overdrive is added again to the brilliance and saturation well not hard rock / metal anyway!

I think there's a bit of a gap between the gain made fully and fairly gradual rather overdrive from 7 / 8.

We can still have a beautiful pallette of sounds between corrections and the coupling tone and overdrive gain always with a grain common typed !!!!.

Grain and its delighted me at first, less then a little less then caused by the HP 8-inch "IRONMONGER" a little ... and gives an effect very slightly nasal Finally medium!!

The sound is rather bold and clear weather and e nEven crisallin, it seems can be a bit contradictory, but true!

I played with a stratovolcano Southwestern CP60 with good results but one made a little uneven depending on the position of the selector microphones.

the effects, rather troubleshooting or not very good 3 / 4 rather poor with a looping invariably doing almost anything, but it helps out, it's true that I compare to my arsenal of the vox then of course !!!!!

I saw the possibilities of settings such as the Vox Valvetronix
least in effect!

I found the HP quite directive, it is enough to orient itself, which is not a problem given the size

I tried the mustang fender 20w, very gadget simultaneously with some very very so so, with an arsenal of usb option, and the effects too .... but it appeared to me much worse in that his orange ....

The particularity and its disadvantage: a very distinctive sound that can not please everyone, but in the very spirit of the brand anyway!!

Other default settings ds certain positions, improve ... or degrade the sound, I had come to start building a set of defined settings ...

I suspect these have ds a kind of electronic circuits delay line, showing a more flattering bcp's which should normally be, with greater sustain (a species of micro-reverb) that embellishes the sound (even excluding the effect Inrush !) and extinction of a note a little longer but not very credible in listen more closely!!

Nb: I have done between the headphone jack on the left and the guitar input jack right on the strip, if you make a mistake, you plug the guitar on the headphones and nothing nothing ... and I'm not the only one who thought it was dumb then down, then it was not the case!

I am more in the context of all lamps in its harmonic richness, so I just say that it is a good choice in absolute terms, but does not suit me for my part ... vis-à-vis my requirements sound may be too high vis-à-vis this type of product necessarily limited, but with good potential for its class!

I think I have done well around the beast, and am available for other forumers possible assistance or information.
See the source
Did you find this review helpful?yesno
Cookies help us improve performance, enhance user experience and deliver our services. By using our services, you agree to our use of cookies. Find out more.