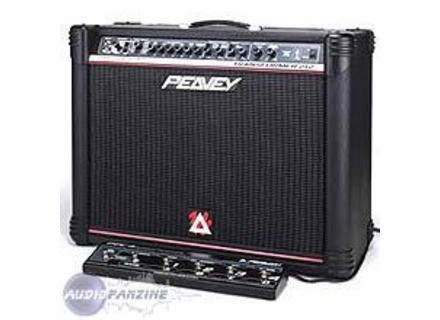 Peavey Transformer 212
4
I originally tried this amp at Marrich Music in Corning, NY. I was fairly impressed with it, but the $1,049 list threw me more than a little bit. Ebay to the rescue!!! I found this amp only a few years old, with no changes save for an updated Peavey logo, for $453 (including shipping).

In a word: Versatile. I can go from classic rock riffs to blues jamming to grunge to mellow clean chord progressions with a flick of the included footswitch. A word about that footswitch, it does everything that all the knobs do except for switching between user and factory presets. The effects aren't world class, but for adding color to your sound, they're just so handy. I also like the tap-tempo feature (and since there's a button on both the amp and the footswitch, you can get REALLY short delay times if you want). The guy I bought it from put castors on it, which has been a total Godsend. I'd recommend that anyone who buys anything this big put castors on it. They're worth their weight in back pain pills.

The 'high gain' settings lack oomph. Don't know how else to say that. I got a Rocktron Rampage distortion pedal, which fixes me for my really distorted sounds. Also, I've never really had the amp up very high (50w+50w does not sit well with parentals) for long periods of time, but feedback seems to be a problem. How much of this could be overcome by experience I have no clue. Though 16 user presets may seem like a lot at first, it's really not. I'm looking into the computer-based control to see if that will allow more.

Well, I bought it used and it hasn't failed me yet, and I've had a few wince-inducing drops.

This amp isn't GREAT at anything, but it's GOOD for just about everything. If you play a lot of different styles like I do, you'll definitely appreciate the flexibility of this amp. The footswitch is Swiss-Army-knife useful, and the output is loud enough to tame my friend's Fender Princeton with my volume on 3. You'll also appreciate the less-blaring sound of a 2x12 over a single speaker.