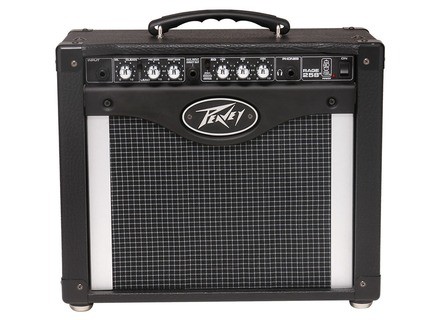 View all offers for Peavey Rage 258 »

Peavey Rage 258
1
This thing has the transtube technology which sounds really good in the Vypyr series but just sounds terrible in this amp. This amp reminds me of everything I hate about solid state amps. It sounds like a trash can banging around and the distortion it creates from that noise. Oh and I forgot about how noisy this thing is...my gosh does this thing make and incredible amount of noise when in the dirty channel. It is very annoying to have that amount of circular noise in an amp.

This is just terrible! It reminds me of the crappy Boss metal pedals that sound thin and nothing like tube distortion. This amp is better fit for a trash can than actually being played. I am a fan of Peavey amps and so this review isn't some slight against the company...this is just a terrible amp.

I am scratching my head why they have even released this amp. The Vypyr series which is the exact same price sounds enormously better than this amp. It is like two different companies made these amps and not just Peavey.

This amp is a complete and utter waste of money. If you want a usable solid amp in the exact same price range then do the Peavey Vypyr. This amp is just flat out garbage. It can say it any clearer than that. I do not recommend this amp to anyone. I do recommend to Peavey to stop selling this hunk of trash!
Did you find this review helpful?yesno
»

Basic Setup
There is a sound quickly, there is not much knob.
One branch, we light one plays.
Two types of sounds if I remember correctly, a mode distortion vintage and modern.

Then we come to the heart ..
This is an amp that I was well serviced and costs only 90euros new.
So for the price I'm not going to cut it but give my opinion.
HP low-end slam very, very medium, no reverb.
The volume knob is not at all progressive, appart I never have more than 2, one has the impression that it is actually much higher.
A one millimeter, it is either inaudible sound is too loud, annoying.
Its very dry.
The sound is very clear quelcuonques, I was surprised not against saturation for such a small amp.

Ultra cool because it is very light or moving it you want without taking space.
Ideal for evening or jam for a little beef in the colleague.
A dry without reverb, medium with very low which quickly slaps in the HP.
Saturation very nice for such a small amp "cheap"
It costs 100euros not even he did nothing away from the exceptional, but for the price it was 25watts and saturation 'nice little one that is good microphones.
That said it is not fully usable watts for the HP too quickly spits and drools less than half the volume.

I would do that choice, in place of j would buy time to leave a 50 euro more for a roland cube 20 watts which sends the paté campaign and has some good effects of integrated and quality.

Peavey Rage 258
4
What type of amplification (lamp, transistor ,...)?
Transistor-am-bid with a technology that emulates the lamps (mouais. ..)
HP8 "Blue Marvel

What is the power delivered?
25W-transistor

What are the settings, effects? ...
-3-band EQ (Low, Mid and High, which correspond to the bass, midrange and treble)
2 channels that share a common EQ (for the price, do not expect anything else) that match the clean channel and the Lead channel.
I note the presence of a 3-position switch that influences the sound more or less (Stack, Modern and Vintage)

The setup is simple?
"Very simple, few settings, perfect for a beginner.

The manual is clear and sufficient?
"I do not remember a manual ....

Do you get a good sound easy?
-For a beginner who wants to scratch quietly without making too much noise, it is quite enough;

Will it fit your style of music?
Yes and no, for all Clean tones and with a slight overdrive of the amp, it suffit.Pour other styles such as Rock and Metal HardRock, a distortion pedal (or a multi-effects, when eh ... you're a beginner) is to be expected because of its lead channel is too rough beyond the stroke of half the volume pot (and again).
However, given the small size of HP (8 "), you will not get a distortion in her famous.

What kind of sound you get and with what settings ("crystalline", "fat ",....)?
"Everything is a matter of settings and how you jouez.J 've been able to obtain satisfactory sound (considering the price of the amp.)

For how long have you been using it?
-I used when I had my Ibanez before resell.

For how long have you been using it? What thing do you like most/least about it? Did you try many other models before getting this one?
Non-

What thing do you like most/least about it?
-Pros: Good sound, cheap and simple adjustments
-Cons: HP is too small, not top Lead channel

Knowing what you know now, would you make the same choice? ...
-With experience, no, I do not do it again this election, but an amp that I recommend for beginners.

Tom790's review (This content has been automatically translated from French)

It's pretty simple to make a correct sound. A newbie is not going to lose

The clean sound is a bit cold but slamming
I play it with a copy of strat
In disto on the other hand is really good for this price. Everything can be kind of like her

I bought 2 years ago for 120 Euros.
But as a first amp it is really not bad
I recommend it for beginners who do not want to ruin an amp in too costly
I refrigerant selected EF