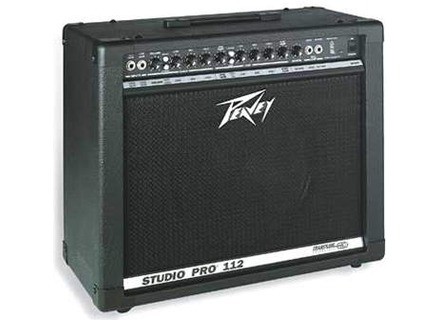 All user reviews for the Peavey Studio Pro 112 (Transtube)

Average Score:3.7( 3.7/5 based on 3 reviews )
Value For Money : Excellent
Not satisfied with those reviews?
Our members also liked:

Peavey Studio Pro 112 (Transtube)
4
The Peavey Transtube Studio Pro amplifier is a great 40 watt 1x12 combo that has evolved over the years from being one of the older Peavey offerings in the seventies, to one of the more renowned solid state combos made. This particular model was built in the mid to late nineties. It has two channels for clean and drive. There is separate EQs for each channel, as well as voicing switches available to change up the tonal character. The clean channel has a bright switch, and the drive channel has a gain boost as well as a "thrash" switch, which scoops out the mids and adds more gain for metal type tones. The amp also has reverb and an effects loop as well. Definitely an amp that has everything you need and nothing that you don't!

All in all I think the Peavey Studio Pro Transtube is a killer solidstate jamming amp for someone who needs something rockin' to serve as a grab and go tool for jams or the stage. It has the flexibility to cover many styles, the tones are honest and genuine, and the power amp section really allows the tones to FEEL right, which is a rarity in SS amps like this. They haven't made this particular revision of the amp for about 15 years, so you'd have to hunt out a used one, but they're not difficult to find. Certainly worth a look to me.

Peavey Studio Pro 112 (Transtube)
4
Everything has been said

two channels with EQ and separate volumes.
The buttons provide trash and gain additional colors.
Amp actually quite complete (loop, reverb, two inputs), but also one of the last made in USA ... A tank ... Mine was not bad experience, I kept it 11 years and it will not hurt ballad ...

pity that the footswitch was an option.

There's a lot of good and not ...
> The clean is fairly straight, cold, neutral, but it is a plus if there glue modulation effects. For clean passages in the heavy it will not hurt for a warm and bluesy ... do not buy it! Small problem: if the power is there, spent a third of the volume, the sound begins to distort, not always so well ... music (for my taste).
> The lead gave me satisfaction in the same way on stuff pretty heavy / thrash, with sounds pretty dug (metal ... my period at age 17 what: D). Again, for things chubby and further where the grain plays at least as much (if not more) than the gain, you quickly find the limits with something stiff and cold, and a little artificial (c transtube. .. is marked on at the same time ...)

It was my first amp, and despite its obvious limitations, it has made me many services, thanks to its strength and versatility of form. Its configuration, its solidity and neutrality have even extended life when I have connected a 2.0 POD in the effects loop ...

Anyway ... In the context of the time when I bought it, it was a pretty stupid caricature least to my taste than ValveState marshall the same time, and certainly more reliable!

At the price they are found OCCAZ, it's a very good amp that has a small study provided for the first horse to school with friends!

Nonostar's review (This content has been automatically translated from French)" Beefy"

Still works for 18 years, despite the beer, vomit, kicks, falls, transport, etc.. Good crash knobs a bit.
It is a tank.