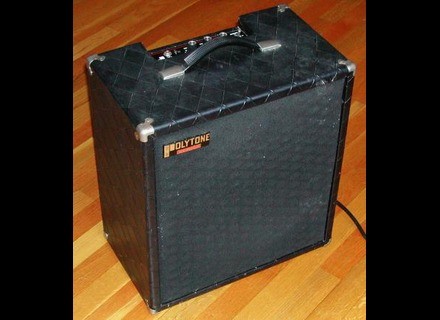 Polytone Mini Brute III
4
This is a solid state amplifier primarily designed for jazz guitar and bass. It has high and low volume inputs, an overall volume knob, dual tone controls (treble and bass) for the low volume input and an overall tone control for the high volume input. There's no manual available for this, and the control panels vary considerably from what I've seen on pictures so this has been arrived at by trial and error. There's an output for a satellite speaker on the back.

Power output is rated at 110 watts in the literature. It's probably accurate but the speaker is not super efficient so it's not as loud as some 100w amps I've used (like a Twin Reverb or Jazz Chorus). The weight, for an old school SS amp is really nice, about 28# IIRC. I'm tempted to drop in a lighter and more efficient neodynium speaker to see what that would do.

I got it with a Polytone extension cabinet, which is a strange little beast. It's also rated at 100w, and includes dual cooling fans. It requires a speaker level input! So, I guess what it's doing is padding down the overall output of the amp for a more accurate representation of that sound (instead of a line out). It works as a "biggener" for small amps, I ran a 5w amp's speaker output into it and got something more along the lines of 50w worth of sound out, so that's pretty cool. Again, no manual so I'm guessing about how things work.

For a basic guitar, bass or electric piano sound, it's perfect right out of the box. Which is good because tone shaping isn't well implemented. It gets a bit buzzy with lots of bass and the volume cranked, but backing down or using the low input solves that.

I'd hoped the extension cab would allow me to use my Roland CE1 in stereo, and replace my Jazz Chorus, but, since the output is speaker level and it require speaker level input to the satellite, it won't work (unless I ran the chorus into another amp to give the input sufficient voltage? nah, too much trouble).

Again, no manual, no online PDF and no help from online searches.

Initially I tried it with a solid body guitar, humbucker pickups, straight in. Great sound, Joe Pass apparently consulted on these and it shows. Trying to match the Jazz Chorus I had next to it, I wasn't getting as bright on high notes or when I switched to a single coil, but the JC has those aluminum dome speakers that are downright cutting if you want it. I dropped a distortion pedal in front of it and it sounded MUCH better than the JC which gets strident when handed distortion. This sounded like a decent tube guitar amp. I could see using this as my one amp.

I wish the controls made more sense. I wish there was a manual for this and especially for the extension cabinet. But overall, for what I paid it's a very good example of solid state sound, especially for smooth, clean tone. These used to be REALLY expensive, $1000+, but with modern Jazz amps being lighter and more flexible the Polytone stuff is in the $200-400 range now, and a bargain at that. The Roland, while more flexible and competent with onboard effects and two channels, is rarely seen for less than $500 used.

vgdb's review (This content has been automatically translated from French)

Polytone Mini Brute III
5
Transistor combo amp, 100W
Weight ~ 15 kg, exceptionally light for an amp of this power
Size: just over the size of HP: 45x47x26 cm
Nothing special in terms of functions (except switch "Boost" which makes the treble filter with resistors connected to the preamp input)
Nothing missing (except maybe a reverb)
1 HP 15-inch, no tweeter
A low input impedance (guitar) jack
A high impedance input (keyboard) jack
1 switch Boost 3 positions to filter the treble
1 volume preamplifier
3 band EQ Bass / Mid / Treble
A distortion (gain / drive) put into operation by turning the gain
1 Master Volume
1 ¼ "TRS effects loop with input gain
1 preamp output jack
1 input jack for a footswitch to the distal
At the rear of the amp, a headphone jack and a power output jack

+ Use basic, simple setup.
+ Very transparent amp, the sound is so easy to control.
Fortunately, since I bought it without a manual (there is a single sheet of paper that I found on the Internet)
- The stickers denoting the two outputs (power and headset) have fallen over time. Took me a while to find out who was who ...
- Distortion at its very exploitable in my opinion (perhaps with a very low rate?)

As indicated above, the section of this combo amp, played through headphones or the power output is very neutral and transparent: we output the amplified input signal.
In contrast, the bowl 15 inch color invariably sound and deprives her of much treble, even if the sound is rather faithful returned from the original.

This amp is the ultimate AMP JAZZ (with some other models like the Fender Hot Rod Deluxe or the Roland Jazz Chorus) with a round sound that sounded like no other guitars to fund jazz.
You get what's hot, round but respects the "crunch" the pick of the attack on the string, but happiness if the guitar is good. Connected behind an Ibanez GB-10 is a couple customized.

I also use from time to time a solid body electric guitar (Schecter Tempest AMENDED with microphones Dynasonic type) with a POD X3 and if care is taken off the amp emulations POD choosing instead a preamp neutral, this configuration holds pleasant surprises, with all the advantages of a multi-effects upstream. She brought happiness to many rock bands at open stages where the scratch was still very surprised by the volume / power and sound of the beast.

I had many opportunities to use this amp before the swap against a Nemesis NC210 bass amp that I no longer use. I was the proud possessor of a Jazz Chorus and I had the opportunity to play regularly on the Fender, of Marshall, Peavey, Randall's etc..

There is no better showcase for my semi-hollow, especially in such a small volume. To get the same type of sound, consider amps twice as heavy and bulky, which will have a different personality but no better. This amp does more than defend himself on more modern sounds, in short, that happiness!

A scratch advise all who want to respect the sound of their guitar. If I had to buy it, I would resume the same or even with reverb (Minibrute IV).