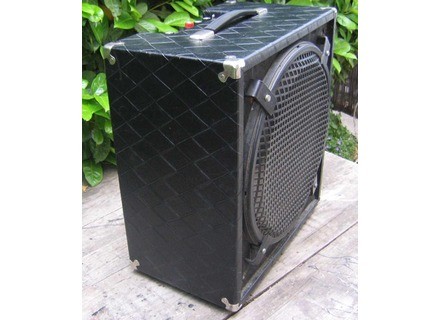 It is a 100% transistor, the power rating is raised, the order of 150W, but the big impdance HP 15 "and the box closed and full of rock wool on closer more than 100W. it's still powerful even trs to save space because everything is back to "shoehorn" around the big HP 15 ". Prmapli, Floor Power, power, reverb are rpart cts on the box to optimize the place up, and finally the whole is packed with rock wool, which has a great influence on sound.

If I remember correctly there are two between high and low impedance, an output for another HP, which is useful if you want to use another type of baffle.

The rglages are-simple, bass, treble, reverb, volume, distortion (carrment horrible) but it's not meant to. A signal, the switch allows power to reverse the phase sector, to reduce snoring.

Archi simple, plug and presto!
Sound, to love, HP15 is a "clump of rock wool. The monstrous punchers are serious, until the floor to vibrate. In short, put an amp on blankets. The range is quite linear with HP can not attack, given the size, below a frightening amount of Dcibel ... and vibrations that are not least.

You understood, this amp is for jazzeux is the IDAL to connect an "archtop" with a beautiful rponse in serious, never will ring your Archtop "draft" with this amp to the proper DGIG all the subtle nuances of medium-low.

Dsesprment I tried to play rock with ... Unusable!
Finally I sold as much as I had bought a jazz guitarist. These amps taient trs dnicher Research and difficult. I made a opration INTERESTED which largely compensated for my lack of rocker got uneducated. Go to jazz what belongs to him!

For he convinced me against its ultra-compact. Even when it is convenient! It is thanks to him I returned happily to small amps, but less powerful too, with HP who allow themselves to "attack".

jpl510's review (This content has been automatically translated from French)" Jazzmen of the amp ..."

Polytone Mini Brute IV
5
Amp transistors given to 110w (and "he is good")
A spring reverb (which easily captures the radio ...); saturation that I do not usually, two inputs (High - Low), 3 positions Dark - normal - very useful sometimes brilliant.
Bass and treble settings, an entry pedal distortion / reverb, a Release "hand out" and an additional output HP (Polytone sells additional speakers)

and that's it! Easier

The settings are effective after that depends on the place (he's safe and it is more comfortable with space!), Guitar, gaming etc.. And in light there always happens.

Is a guitar amp but is also usable as a bass amp. The site shows Polytone Ray Brown connected over Marseille and a renowned bassist uses it regularly.

It is excellent with an archtop and it significantly improves the sound of an electro-acoustic (naturally softens the effect of the piezo crystal) when playing jazz or bossa.
I use it also as a bass amp ... (Beginner)

This is a closed packed glass wool, it takes a little power but it sounds like you play!

I recently lent a Fender Rhodes piano on a concert (he did not like the Fender Twin Reverb proposed to him) and he was literally packed!

Today I will complete the well by a more compact amp (Polytone or EAR) for convenience, but I do not separate myself one day

I would sometimes play with distortion, but this is all the equipment that I would change (and guitar amp) ... we can not do everything with the same equipment, but that's normal.