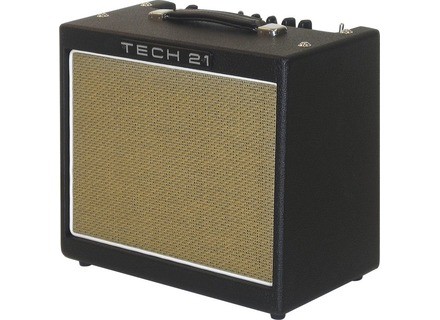 Tech 21 Trademark 30
4
The Tech 21 Trademark 30 is a single channel, single speaker guitar combo amplifier. It's a solid state amplifier, with a single 10" speaker and 30 watts of power. It has a slew of connections, including 1/4" jacks for instrument input, headphones, external speaker output, and return and send effect loops. It also has an XLR direct output, which is cool to have on a guitar amp and somewhat rare.

The Tech 21 Trademark 30 has a good amount of parameters to play with. It has a unique character and modeling section, with amp, speaker, and mode three way switches. For amp modeling, you can choose between tweed, British, and California settings, while the speaker gives you US, UK, or flat settings to choose from. The modes to choose from include clean, hot, and hi gain. This make up is the same as some of Tech 21's trademark modeling pedals. The main parameters on the amp are knobs for drive, low, mid, and high EQ, reverb, and level. No need for a manual here.

The sound of the Tech 21 Trademark 30 is really good, but it's still always going to be a solid state amp. While it's super clean sounding, it does sound like a solid state amp no matter how much you mess with the setting. Even so, it's a nice sounding amplifier and will definitely be suitable for recording in many situations. I like how much control you have, and the XLR output actually sounds quite realistic. Still, I prefer micing the amp and in the end would still like it to be a tube amp, but as far as solid state amps go, this is up there with the best of it's size.

The Tech 21 Trademark 30 is a nice little solid state amplifier for use in the studio or on the stage. It's not expensive and you can get a good amount of differing sounds between the different character settings. It's an awesome amp to have, but I'd still recommend complementing it with a tube amp for times when you just can't live without it. Still, this is a solid recording amp and definitely should be checked out for those guitarists looking for a good amount of control in a solid state amplifier.

Very simple, no sound good with the amp alone.

This is an amp huh? Well, it's a disaster. I know Tech21 long time and have many brand products.
Hoping to find a little extra amp for work or for models, I found a bad thing.

HP is probably the big fault of this machine, but I also believe my ears sharp lamps since qq years no longer tolerate the sounds lifeless.

Tech21 did, the TM30 lifeless. And more expensive it is.

Tech 21 Trademark 30
5
All transistor amp. It says it all analog. By opening the lid, you can see all the same processors everything is mini component. It may be 100% analogiqu, but especially the electronic microphone.
Anyway, it does not change anything.
Power 30w announced. Ideal for living room, dt has a direct output xlrpour sortire versune table. So nickel.
The settings: as said everywhere, we rule the type of amp between fender, marshall and mesa, on what they call MOD rule, according to the same type of amp. I would say it is the twang, or attack. Finally, the sensitivity of the speaker (its simulation) is rule by the three same categories.
It is not difficult though.
The connection: there is everything.
The spring reverb: perfect.

So it's very simple. Basically, there are three amps in one room sound format.
After can be modulated by crosses.
Personally, I use the HP "Brit" which deflated quite sound fender and gives it a tangy flavor. This is the sound I love, that's all.

Amp perfect show.
The sound is very good vraiement.
I tested the amp between 10 and 60 lamp and transistor.
This one is excellent and versatile.
In addition it is very good for an amp and very well finished.
The knob can sculpt yet to bring more brightness and dosing serious. The drive does its job conventional manner.
Anyway, I found my sound, not strong fort.
That is to say the sound of a Blues Deluxe. And it is the same ea recording.
Long as I'm on a JCM 800, but not strong.
Pr compared to fender amps teansistor it is vriament best. Pr compared to marshall vintage thpe lead 12 combo or master, it is rounder, less "Harsh".

I also tried the 60 trademark. It's a big beast that is noisy vacuum. So for dalon, c't not great. Put it was the top one.
I took her little brother. It is perfect.
Fapport quality price?
Buy € 270. This is the price.

And yes, I will advise the amp everyone. But it is very difficult to find!

Bbr6704's review (This content has been automatically translated from French)

Tech 21 Trademark 30
5
Transistor combo amp, 30w, with a 10 inch hp.
3 "models" analog (that&#39;s why I put quotation marks modeling, it is not digital), three levels of earnings, and 3 types of emulations hp.
It&#39;s all analog, with the addition of these presets, gain adjustment, an active equalization, reverb and a master.
Behind, an effects loop, external hp output, XLR DI output for recording, and a headphone output.
This is done bine, it looks tough, and at the same time, it&#39;s light, which is good practice to move!
Mine is a former manufactured in the U.S..

Both simple and complex! Let me explain:
Simply because in the choice of character, it is super simple: an emulation types fender, a marshall typed, and typed a mesa.
In short, choosing a type of amplifier, a gain level, a type of hp, and you can play, and it sounds!
on the other hand, active equalization is very sensitive and precise, as soon as one enters into it, it gets complicated: it can drastically change the sound completely, and it is a long fumbling to find exactly what you wants.
There are also plenty of examples of sounds on the site of 21 tech habits, it can start with a wide range, and fine-tune his guitar and according to his tastes.
Basically, I would say though that the use is simple, it is far from a gas factory!
The only regret is the absence of any means to change her via a footswitch, it would have been top notch: to switch from clean to a distorted sound, for example, must be a manipulation to manually, or use a foot pedal ... it is the only negative I found him.

Here we go to the heart!
There are three types of sound that some say, and it&#39;s true, but good 3.
I tried several digital amps before opting for the trademark, and it was quickly folded!
New small toys offer a sling load of amps and effects, and all kinds of stuff, but never one&#39;s drinking!
Here is just the opposite: We may be fewer opportunities (it remains to be demonstrated because the palette is still very large), but that&#39;s good!
This gives a range of tonal colors with Equalization, for each type of amps available.
Where sometimes it is still surprising is that the EQ is very sensitive and efficient, which is both a plus and a minus times: it also happens to make sounds not so good, that sound not, if we emphasize too certain settings ...
And what is especially striking is the report: it is a bit on some of the saturated compressed, but what a dynamic and above all, what grain!
The first time I played it, I followed an example set of ac / dc 21 proposed by tech: it sounds ac / dc! It increases a little gain, it sounds Appetite era Guns!
The sound is really tip top! Same plain, was a wide range, you push a little gain, and presto, Keith Richards, here I am!
And so on.
In the end, I managed to find a good equation common to a clear and popping sounds, suddenly, a manipulation of the mode, and now I have at hand everything I need to cushy play at home, with excellent sound reproduction!
Moreover, during a test, first turn all the EQ at noon, with play modes, there&#39;s already something to do more than pleasure, then after only touch the EQ settings, you will see ...
Last point: the reverb is superb!

I have this amp for some months now: I have tried a lot in the range "small amp for home and play with others", it buries everything I&#39;ve tried!
I tested the vox, the Roland, the line 6, the peavey, yamaha, well I think it&#39;s two worlds: The modeling of any kind I was never convinced it sounds sometimes, but never "true" to my ears! Here, the sound is organic, living, real, that&#39;s what I wanted.
The power is decent and can play alone at home, and one also feels that he has under the hood to have a voice in a jam for example.
The finish is good, it is very compact, easy to handle, has a nice face, in short, that happiness!
I touched occas at a rate of € 150 must be worth knowing that a little more than double in nine: the price of nine, I think I have a little hesitant, but then, at that price, it was almost closed eyes! So I would do almost without hesitation that choice!
It has a good record, at several levels of volume, it still sounds.
And especially, I repeat myself and that&#39;s pretty subjective, but what is striking is that this amp has grain, character, and it is my most important in an amp of any kind!
Frankly, I highly recommend this product to try! (D&#39;&#39; Moreover, it is now a bunch of time proposed by 21 without high tech evolution, perhaps because there is not much to improve on it).

Did you find this review helpful?yesno
»
Read the 8 user reviews on the Tech 21 Trademark 30 »