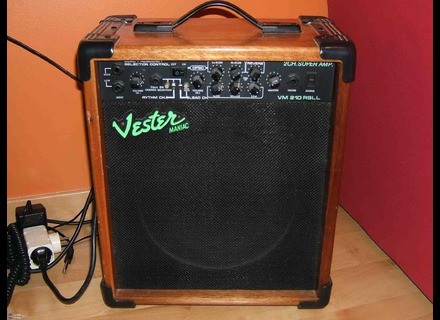 All user reviews for the Vester Maniac

Vester Maniac
3
First of all, it's an amp, not a guitar (you can tell that from the picture...).
Made in Korea.
Solid-state, 20W
1 10'' speaker
2 channels (drive and clean) with independent volume controls
1 three-band EQ
1 Dual Frequency selection control (DFSC)
1 Spring reverb.
2 inputs (high, low)
1 preamp output, 1 headphone jack
1 footswitch to switch channels

The wooden finish looks very nice. It's rather sturdy with its reinforced corners, but the wooden parts have a tendency to scratch easily.
It's lightweight and easy to transport.

Generally, speaking, its sounds are all right, but they lack some energy (in the lows).
The DFSC allows you to get warmer sounds, it's sort of an amp emulator.
The built-in overdrive is okay, but I certainly prefer to plug in my multi-effects and use the clean channel.
It has enough power for home but not for rehearsals.

I've had it for more than 12 years. I like its look, lightness and the DFSC.
I don't like its lack of fullness. It replaced a 100W marshall JCM800 and they are clearly different things: I wanted something more gentle for home. I looked at a Fender (the clean sounds were better but the distortion were worse) and some other low-end amps, but this one seemed like a good value for money and quite versatile.
If I were in the same situation again, I'd choose a small tube amp with less controls and more warmth.
Did you find this review helpful?yesno

Vester Maniac
5
Guitar manufactured in California.
22 frets, 2 humbuckers, 1 volume control (strangely labeled TONE ???), Floyd Rose, in a sense (although it's not that bad), 3-position switch too close to the neck pickup. Schaller tuners with
Birdseye maple neck that looks beautiful.
Basswood body.
No cutaway behind (like on the Axis, Axis Sport and Axis Super Sport). I own two Axis Sport, so the first days I played it I wondered why it hurt my ribs… that's why. Once you get used to it, you are more aware of it. Like "Doliprane," I'm thinking of adding a D-Tuner, but I'm all ears in this regard (ideas anybody?), so I'll wait a bit longer.

The neck is very, very nice, it's so comfortable that this is the only guitar I use. Everybody says the same, and it's true. Short people or with small hands are lucky, because the scale is short.
Access to the upper frets is very easy. Good ergonomic design, it's comfortable to play with.
The sounds it provides aren't extensible (3-positions), but the volume control largely increases the possibilities

This guitar sounds good, that's evident. The pickups are very powerful, the basswood provides a very warm touch. It's easy to compare it to the Axis sport, which is made of ash wood. Put simply, it's a difference similar to that between a Strat and an LP in terms of tone. With my Hot Rod, the lows of clean sounds are very powerful.
With distortion sounds it's amazing (using the amp's distortion, TS9, DS1).
From blues to hard rock and rock, everything is possible.
The three positions are magical.
I wonder how my guitar would sound with a 5150. I have read in the forums that people say the 5150 is cold, but maybe it rocks with my EVH!!!
High-quality sounds.

This guitar is magical, it provides a different color than my Axis Sport and Axis Sport "P90," so I got rid of my LUKE (even if it had a flamed neck, like I've never seen on any other LUKE).
The particularity of this guitar (and all Music Mans in general), is that you feel very comfortable with it and you actually progress playing with it.
Its value for money could be better, I paid €2900 (secondhand, obviously, but it was like new, almost never played). It's a collector's item, and while the value of the Axis falls when resold (look them up on e-bay), the EVH (the authentic ones) don't lose almost any value.
If I had to, I'd buy an Ibanez RX 20521000…, No…I'm joking, I would certainly buy this guitar again with my eyes closed. It took me two years to find one and I'm not disappointed at all. Music Man guitars are awesome.
Did you find this review helpful?yesno
Cookies help us improve performance, enhance user experience and deliver our services. By using our services, you agree to our use of cookies. Find out more.