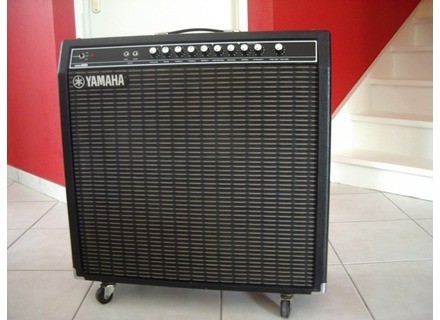 Yamaha G410
3
This amp is a big surprise. I don't think of decent amps when I think of Yamaha but this amp has some features that I wish were available on modern amps. The tone from this amp isn't the best but what I find to be very cool is the parametric EQ which is much like the Mark series amps from Mesa Boogie. Fryette/VHT has done a great job of using a parametric EQ which allows the user to get very specific with their tone. This allows different guitars to be used but still not having the amp suffer as much from weaker guitar or weak pickups.

You have two channels, one for the clean and one for the distortion. Then you have the standard treble, middle, and bass. Next you have a four control knob parametric EQing section. Just one less control then say a Mark lll amp which has five parameters of EQing controls. You can scoop the mids or boots highs and bass or lower the bass and treble to increase the mid range. I ton of options available.

The tone on this amp isn't the best. These amps were made in the late 70's early 80's and only had a few years of actual production. For whatever reason they on made them for about 3-4 years.

The clean channel is decent but nothing to write home about either. You get a usable but not really recordable clean tone. The distortion is very flat and thin sounding. Not something you would record with either. Not really a great or even good tone.

Pretty much any guitar will work with this amp. Again this is a practice amp and not designed to be a stage amp even though technically you can play it on stage but not at and larger venue.

The amp is build solid and if you found one used on the market, chances are that it would be is a pretty good working order.

The reason this amp is great is because it is really designed to be a home practice amp. Not to mention these were some of the first multi-channel amps ever produced. Not many if any manufacturers were even doing two channel amps. Marshall had two inputs for two channels but it really wasn't a two channel amp. I am referring to JMP amp which would have 4 inputs for higher and lower darker and bright. You couldn't switch with a footswitch like you can with this amp. So this was in my opinion a very revolutionary design.
Did you find this review helpful?yesno
»

red special's review (This content has been automatically translated from French)

A play in clean (no gain)
or go through a rod.
I love her look "big thing".
I hate not being able to exploit a larger volume (2 in rehearsal, otherwise riot!)

I have since 1978, purchased new.
Quality Level: yamaha, need I say, never a single problem in almost 30 years.
Good to do everything, I separated for a more distinctive blues rock amp.
I played on a lot of amps, and I realize that there is very versatile for everything clear sound. Perfect for jazz, funk, new wave, gospel, and the Caribbean .... what power!

7/11/08
I sold it a while ago. It remains a very good memory. I play today on Vox AC 30 CC2X, and frankly, for its clear, the yamaha has nothing to envy him, for his cons for saturated, do not count, except with a very good pedal ( vox bulldog or Maxxon OD9 example).
If you come across one and you have the room (!) Jump on it, it's very rare!
Did you find this review helpful?yesno
»