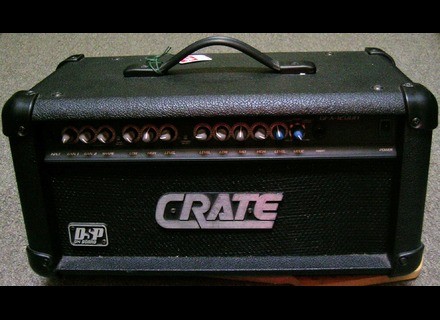 Crate GFX-1200H
4
For an inexpensive 120 amp head, this thing rocks. As with most Crate amps of the last 10 yrs they have done it again, they nailed tube tone from an inexpensive solid sate amp. I build and repair tube amps, but Crate has floored me again with the tone and crunch they are getting from this amp. I've played guitar for about 30 yrs now, I'm in a Death Metal band and the GFX 1200 is a great rehearsal/recording amp for me, I normaly use a B-52 AT 100 on stage

I bought this amp off of craigslist in Jacksonville FL for $50.00, it had some nasty hum issues, but after a quick solder job(the filter caps had cold solder joints)it sounds quiet,meaty,crunchy and the clean channel with the digi FX made me rember how much I missed a sweet chorus effect.

The amount of sound and tone you get from such a small light weight amp head, compaired to my tube amps this thing is like a feather to tote, oh I did I mention the tone. I'm not much into FX on the crunch channel of any amp, but on the clean channel the chorus,reverb and delay are very cool, it has a flanger also but I don't use that to much, and did I mention the tone, yes tone very very close to a tube amp, not sterile and bright like a lot of SS amp...cough cough um..Marshall MGDFX Heads....The Crate GFX amps kill the Marshall MGDFX amps(I've worked on both)..more tone,more bottom end growl(for METAL)more sound and tone at high volume.

The fact that I can't asign the DSP to a single channel..ie Clean or Crunch. The fact that it's under rated,my friends laughed at me when I showed up with it, that untill I unleashed it and let it run ramped through the band room...who's laughing now!!!!

The Crate GFX 1200 is built very well for a small 120 watt amp head, aside from the soldering the amp is tough, maybe Crate and LOUD Technologies can figure out some thing to stop the solder joints from cracking..99% of the Crate amps I work on(new and old) have soldering issues.

The Crate GFX amps kill the Marshall MGDFX amps. Crate has one of the best lines of affordable,Solid State amps on the market new and used

Crate GFX-1200H
4
Paid $350 from Guitar Center. I bought this unit at least a year or two ago, I basically was looking for an affordable halfstack but with enough crunch and gain to fullfill my sound needed for my metal band.

Just about everything on this head is great. 120 watts is loud enough for most people, though i am soon upgrading to GFX2200H, seeing my band is becoming bigger, doing more shows and needing more loundess. The shape on this head is great, adjusting it to lower setting gives less distortion but great for playing iron maiden, add more gain and you can get as heavy as metallica to jsut about anyone. Everyone may say tubes are the best, and they are great, but if you dont got the money then this is the head for you.

The only think I dont like about this head is at lower volumes I find certain settings great but when turned up i find i dont like them, fidget with the setting sto get the perfect sound.

Good construction, I drag this thing around everywhere its holds up great. Looks to small to most musicians, but then when kicked on most people drop their mouths. This head looks small and a bit stupid but throwing out 120 watts makes this a little instrument of destruction.

If you are lookiong for a digital, non expensive head this is it. Great distortion with awesome reliability. Never given me a problem. This best head for the $.