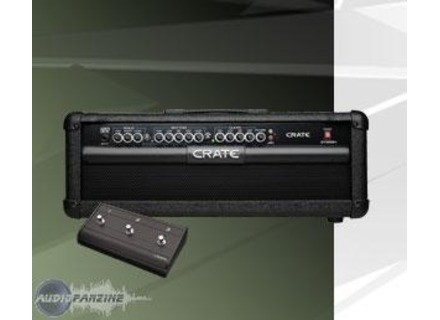 Crate GT1200H
4
I' ve been playing for about 4 and a half years now. I play black chaotic metal ( band ) and alot of suthing melodic stuff to please the mind. I'm mostly into metal ( no bullshit like Nu metal or hardcore ) I mean good old metal. héhé

I got this midget in a local music store in my hometown in Belgium. I was amazed that in costed only 450eur ( in promotion ) and it was the last one. I was on a tight budget and i decuded to give this amp a go. ( before purchasing it i did a very wide investiagion about this product, ofcourse ) I sugest everyone to do the same if you're interested in purchasing some gear!!!

I love the fact that is't a solid state ( almost nothing that can go wrong ) and allso it's built very well. very hard and decent! I actualy expected it to be built like a chineese motorcycle, but i've allready got proven wrong. We do alot of transportation with the band and it gets kicked around alot, but no problems! The clean chanel is very good for a solid state! Surprisingly good!

The spring reverb is allso a very nice sounding feature. BUT! For the distortion chanels are a little too weak for our music, i just bypass an external distortion pedal through it and voila, problem solved! The lead distortion is good enough for 80ies metal, but not black. Well still i love the sound! And this mad midget will blow the drummer away! It has enough power to gig with it in a concert room with +-250 300 people! No need to mic it up.

Of course there's a few disadvantages. Because this amp is cheap, there are a few things where some money was saved on. like:
- Knobs are made of plastic ( but haven't fallen off yet )
- The footswitch is very light, but yet steady ( note sometimes the jack inputs on the footswitch get a little lose. Just tight it up, and you're ready to go )
- The cab is very compact! I mean this amp is TOO SMALL for 120Watt of power ( but it delivers it effortlessly!!! )
- There are no 2inputs for send/return effects, you need to obtain a special cable for that.

But in general i still don't care about these minor issues!!!

I love the way that the price/quality ratio is so good! This amp is built to survive an american invasion! Very well built ( exept cost saving materials like plastic ) The grid of the cab is allso very tough. And note the cab is surprisingly light! i've tested it with 100Watt rms cabs and i couldn't lift it off the ground. Another feature i love is the fact that this amp was built for punishement! I played 4.5 hours on it ( volume on 7 ) and the power transformer wasn't even hot in the end.

Ok here's the deal. If you're an all round musitian looking for good tone and a decent price/quality ration, this would definatly be a good choice! This amp is very versatile. ( but for my personal pleasure i still use a dist pedal héhé ) I'm not disapointd in crate. Me and my midget will still have allot of fun for many years!!! ( a good 4 because of the slight minor issues )

Crate GT1200H
4
I bought this amp from Sound Control music store (UK). I'd had my eye on it for a while as I'd originally intended to buy a Marshall AVT50H head and AVT412 cab, but I wasn't happy with that and this Crate was far superior. It costs £199 for the head and the same for the 4x12 cab, but I paid less because I traded another amp in part exchange.

Everything except the weight! It's a half-stack so it's a heavy motherf***er. Other than that it's wonderful - the clean channel is great, sparkling and clear, with good separation of all the frequencies. Overdrive 1 (Rhythm channel) has good, rock n' roll type grit to it and the tone is very good (I've tries solid-state amps before where the tone was like a cow with a hernia). Again, the rhythm channel is very responsive and gives very good note separation.

On to the Lead channel. What can I say? You can play Slayer music with the gain at 5. It is SO mean, brutal and beautiful all in one, responsive, clear and with enough crunch to make your knees go. The clean channel has its own set of tone controls, and the two drive channels share a set, plus each has a separate volume and the Lead channel has a "Shape" dial too (which is VERY effective). The footswitch is great - very sensitive and with good LEDs on it and you can turn the reverb on and off from it too.

The speaker cab is built like a tank - it has kick-proof metal mesh over the speakers instead of cloth like a lot of other cabs, so it'll stand up to road wear (and household pets) very well. It also has detachable wheels so it's easier to move. And the Crate speakers kick.

The only thing that could be better is the footswitch: instead of having one switch per channel, there's a switch for the reverb, a "Master" switch to go between clean and drive, then a "Slave" switch to go between rhythm and lead, so you have to select which drive channel you want to switch to from clean before you do it. But that's all. Bottom line - DO NOT let the low price put you off, this amp is worth a lot more than they charge for it. It's the best "Tube-sim" solid amp I ever played - it beats the bejesus out of Marshall MG (and AVT, for that matter), Peavey Transtube and all the Fender ones. It gets pretty damn close.

Great. Like I said it's very sturdy - well-jointed wood on the amp head and the cab, kick-proof speaker covering and the head is hard-wired so there's no power cable to lose. And because it's solid state there are no valves to wear down or break. I can see it being with me for a LONG time to come.

Bottom line: if you are a guitarist at anything up to semi-pro (though I ain't certain whether this amp wouldn't do for a pro) and need a versatile, useable and no-bullshit amp that will do the job and then some, give this baby some thought. Try it - you never know. I'm picky about my gear and I love this amp.

I give it 4 out of 5 (not the full 5 only because there's no such thing as the perfect amp).

Nigel's review (This content has been automatically translated from French)

Crate GT1200H
3
It's simple 2-channel + a boost. For more details refer to the official website. Head finally complete enough that responds to a household communications.

Yes the setup is very simple. It is a head with a personality quite marked and oriented metal Crate & Co obtained so quickly such a sound. No need to book. His handicap: not a lot of possible setups with pallets providing different sounds to each other.

Correct but very typical for this price. The distortion is honest if a little noisy and clean answer this. The only problem we are somewhat stuck in a register sound pretty accurate.

I sometimes use this amp in rehearsals for my main group that takes place in a music store. I test so often that comes out and makes me feel. There's no surprise that the metal head that will allow beginners to have the body double look, a distortion presence and simple adjustments.