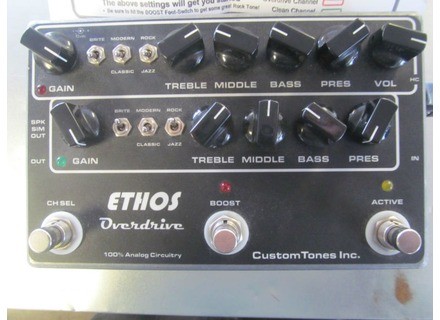 Jeg Folay's review (This content has been automatically translated from French)"The "Wow" pedal!"

Custom Tones ETHOS OVERDRIVE TLE
5
"100% analog circuitry" that is marked above. It is therefore a very large size analog preamp pedal (I was told Eventide) whose purpose is the sound reproduction of the legendary amp (and found) Dumble Overdrive (though 100% lamps) .
In fact, during my research, I discovered that it was only one of many pedals preamp / OD on this niche. And for those who read the records, one of the most popular amps "boutique" models in the digital modelers (Line6 in particular).
Glue connectors with the purpose of the object (input Direct output, a amp output), it suits me.
In use pure preamp, one might say that it lacks an effects loop (as if that was not enough the brothel). No problem for some months can be ordered with the optional foot pedal or install afterwards (but must return the object to the States).
It can also be plugged into a mixer or recorder, it has an output with speaker simulator. Recorded, but it makes good headphone is not all-of-fact way.

So we will find 2 channels (clean & OD is original) and a boost to the OD, all Bypassable.
Are buttons and switches everywhere is awesome when you open the box. If we follow the advice of the record to hear what gives the beast sounds "basic", it sounds and is already assured. You can start playing with all the buttons to find sounds (a clean, saturated, necessarily) that bottent us. And frankly, it&#39;s coming fast.
In fact, each channel has 3 EQ (BMT like at Subway), a Gain and Presence in pots and 3 mini switches to shape the sound (classic / modern, jazz / rock, brite on / off). The overdrive channel has a knob more volume and boost the wholesale footswitch.
The other two footswitches are the choice of channel (one would have suspected) and a bypass. Note that the bypass is not a true bypass but passes through a buffer. No pure transparency, but a constant regardless of the effects chain used his. I still weighing the pros and cons ...
Finally, there was a knob on the right side (Hi-cut) and a mini-switch (GAC) on the left side and the mini-switch TLE / Classic.
We arrive at the biggest flaw of the machine: no programming possible. And the pots that look super easy, as saying that there is the camera of your phone that will keep the memory setting of hell that serious or repeated decanted during the concert. Even so SansAmp scheme would be too long.

The sound is amazing, simply. I obviously do not know the amp inspiration, but the sound is "full", very close to the feel of a tube amp.
The clean sound (I say "the" because I play with one setting clear sound, but with mini-switches, it is easy to shape the clear sound you want), which was my first motivation is really very pleasant at all times (and in all styles). This is the kind of sound that would flow tube amps if was standard on transistor amps.
Saturated sound does not fetch double or triple gain stage of Mesa, Soldano and others. No saturation insane to Petrucci, therefore, but a nice saturation that does the job and will not abandon you on / Pieces AC DC or Ted Nugent.
The strength of the picking or the output level of the guitar (volume) will affect the drive pedal, regardless of the selected channel, which is super nice when his right hand is controlled (or volume knob)
The boost is a bit disappointing. I&#39;m not sure how it is implemented, but it looks like he is above the gain, suddenly it will densify the saturation rather than really boost output. That would explain that the function is available for the saturated channel anyway.
TLE (Low Tight End) is a global switch but a little accessory that reduces the prevalence of low. In rock, you&#39;ll enjoy: it brings clarity to the sound.
GAC (Guitar Amp Compensation) is supposed to compensate for the tonal change of a guitar amp in neutral when its branch in the ETHOS input of an amp (obviously in the FX Return on will not worry). It is coupled with a high cut knob. I have not really made a difference to the GAC, but HiCut is important because the pedal generates a lot of highs that may interfere.

Before I played on the SansAmp (Tri-AC and GT-2) and this is the search for clear sound that has turned me (hard drive clear sound with these pedals). That said, in full, was more variety with SansAmp but the sound is much richer with ETHOS.
And FYI, I plug the pedal in a transistor amp (ZT Club), which is not the most flattering treatment, it seems.

It is impossible to try to know unless an owner who wants to play with you because it is distributed by the manufacturer in the USA. And this is its main flaw in my opinion for a pedal of this price. Suddenly I relied on the sound samples on the site, and all comparative trials and YouTube (for hours!)
In this regard, the price is around $ 460 plus shipping and customs. In the end it was in France (December 2013) for € 400 + € 80 customs. Yeah, it&#39;s a little investment for a pedal even with favorable exchange rates. Especially since it is very rare to find it secondhand.
Today, I try many competitors (such as ADA APP-1 or SansAmp FlyRig5) to see if they really compete with this one before I decide, but for 6 months I played with it is really excellent.