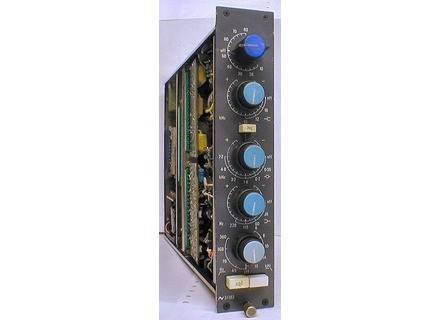 Neve 31102
5
The Neve 31102 is a channel strip that consists of a preamplifier and an equalizer. I've used these preamps in a Neve 8068 console, which I believe these come standard with. They are very similar to the popular Neve 1073 channel strips, but these have a few extra features which I will outline in this review. It doesn't have any standard connections, as it is a module that fits in a board. It isn't rack mountable outside of a board, but I would imagine that those who have these outside of a console have it in something homemade.

It isn't too tough to learn how to use the Neve 31102, as it's very similar to a few other Neve modules. Even if you don't have experience with Neve modules, I think it's still easy enough to figure out how to use. However, it will definitely help if you are familiar with the make up of Neve modules. The equalizer is a four band EQ, with the top high band having a band to put it in or out, which is one of the differences between the 31102 and the 1073. Each band of equalization has parameters for frequency and gain. The module also has a trim knob for the preamp, and an EQ bypass and phase buttons as well. I haven't seen a manual for this Neve module...

The overall sound of the Neve 31102 makes it one of the best sounding modules that I've used. The Neve 8068 (which this module is from) is overall one of my favorite consoles out there. The preamps have an extremely full sound, and are versatile enough to be used for any application, which is what you would expect from a module from a console. The EQ is very easy to use in my opinion, and it's great for getting proper equalization during tracking or mixing. It's hard to put down in words the pristine nature of this sound, but it's really one of the best Neve modules I've used.

I don't know how easy it would be to find a Neve 31102 outside of the 8068 console, but I would imagine that they do float around and are available. The 31102's don't have as much acclaim to their name as the 1073's or the 1084's, but they are every bit as good as them, if not better as it has more features than the 1073. If you can afford a few of these modules or the full 8068 console itself, I'll assume you're a professional studio owner as these are incredibly pricey! If you do get the chance to check out these modules (or buy one!), you'll be very pleased that you did as these are definitely some special channel strips.
Did you find this review helpful?yesno
»