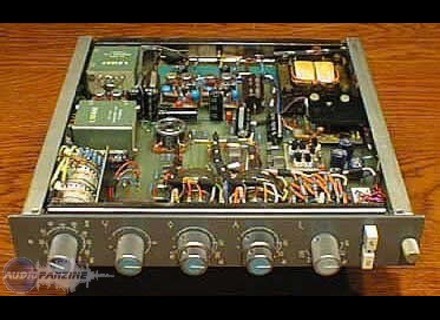 Neve 3115
5
The Neve 3115's are vintage modules that I'm not sure the origin of. I've used a pair of these racked in a custom casing with it's own power supply and all, making it a self sufficient unit, as is necessary with any module. An outside engineer brought in a pair of these to the studio that I work at for a session that I was assisting on. I don't know what console these are from originally. They won't be rack mountable in a traditional sense, unless you get them put together that way.

If you're familiar with the general configuration of Neve preamps, you shouldn't feel out of place with the 3115. I don't remember the exact make up of this pre, but I remember it being pretty similar to something like a 1073 or a 31102, if my memory serves me right. Either way, if you have experience with channel strips, as you should if you're using one of this caliber, you shouldn't have any issues using it. A manual would most likely be impossible find...

The sound of the Neve 3115 is definitely that of a bona fide Neve. It has a good amount of low mid end presence, and is definitely suitable for recording applications of all types. The EQ sounds awesome and is great for beefing up your sound when needed. On the session that I used these on, we recorded the electric guitars through these to get a different type of sound from that of the console that we were recording everything else with. These are more than adequate modules for recording anything and everything.

While not as popular or readily available as some of the other Neve modules out there, the 3115 is still a great option if you can find them at a decent enough price. While I don't like them as much as something like the 1073, they still sound great and offer up their own color. Not too many people will stumble across these, but if you do, definitely take advantage of their use!
Did you find this review helpful?yesno
»

Zorglüb's review (This content has been automatically translated from French)

To insiders, these preamps, like their counterparts in the 1081, working in pure class A at the stage of pre-amplification (BA438), filter (BA406) and EQ (BA438). Only the driver output, the BA440 series 33 ... or 31 .. and its counterpart, the BA340 series 10 .., use a different class of mixed amplification called "AB" before attacking the output transformer of the module: In fact, the BA440 is operating in class A until the signal level exceeds a certain threshold beyond which it operates in Class B. ..
FYI, the BA438, BA406 and BA440 are submodules discrete transistors used to perform all the active elements of the preamps, but also all other assets of these consoles: they are indeed found in the routing and modules amps output line or monitoring consoles this generation. They are also identical to the BA338, BA306 and BA340 series Studio (you know, the 1081 and 8048 ...) with the exception of the disappearance of a diode temperature drift compensation and the addition of a system of fixing the sub-module on the main board. For the first few consoles that time had the bad habit of losing these famous discrete sub-modules when the ballads too much or when they began to heat up! Fortunately, the addition of a single small screw permits easily remedy this shameful ...
A few years later, these sub-modules transistor disappeared in "profit" of sub-modules equipped this time of Integrated Circuits (eg, the BA638) or hybrid (tansistors and CI) as the BA640.
Ah, last but not least, the microphone input transformer has an impedance of the original 1200 Ohms, but this may be reduced to 300 ohms if you want to use the preamp with a ribbon microphone. Remember, these little wonders of electronics have a microphone input gain of 80dB!
Of course, these preamps, originally intended to equip consoles (ah, a Neve console ...), complete lack of traditional connections. Their use outside their original container requires to put in a rack, to provide an independent power supply and a suitable connection, but that&#39;s another story ...

We talk about preamps, so once they are racks and ready for use, the rest is a breeze, right?
Little advice anyway, if you&#39;re lucky enough to own one of these trinkets ... Do install on your rack:
- A meter to monitor the level of signal modulation,
- An insertion (pre or post filtering section) for ... add a gate or a compressor.
FYI, it was intended when designing the modules, but is performed at module level routing on the original consoles.
These additions, oddly absent from all the racks for sale by both AMS-Neve by different specialists vintage equipment, will make your rack preamp the best discrete with a sound engineer or a musician can dream ...
Ah, just for musicians, remember to equip it with a high impedance DI input.

Feel free to contact me if you want more information about this or if you wish to review or change your rack. I have all the elements needed - materials and equipment - to carry out such interventions.

Sound quality ... Is it really necessary to talk about? It seems that time and history have already said everything about it ...
The electronics of 33115 is identical to that of 1081, the sound can be different? Of course, the equalizer is equipped with two bands mediums, but honestly, is it a handicap?

If I use a lot?
Guess ...
As for the price, in relation to that of 1081, is there a hesitation possible? Almost half the price for a unit equivalent to 95% ...
Nothing like a pair of these modules to reach the lunar 7th Heaven ...

lpkyer's review (This content has been automatically translated from French)

Easy to use. One can hire / dsengager the EQ and phase reverse.

Prampli EQ section and is similar to 1073 but the sound is gnralement more "punchy" and less "boomy". Lgrement less fat ... a bit more API-esque but remains the same neve .... the sound is easily identifiable and neve trs sounds familiar.