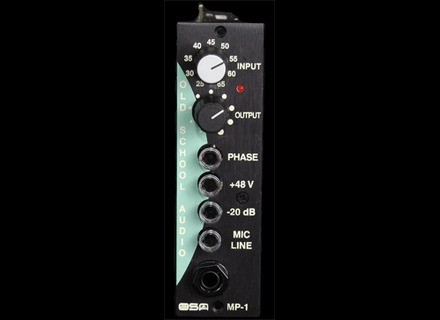 Old School Audio MP1-A
5
Old School Audio's MP1-A is a simple 500 series microphone preamplifier. It's easy to use and won't throw any curveballs at you. It has a 1/4" instrument input in the front of it, but it doesn't have any main connections or power of it's own, as it will get them from the 500 series casing you put it in. It can only be used in a 500 series rack, as it isn't rack mountable in a traditional sense.

The make up of the Old School Audio MP1-A is pretty easy to follow, as it really just has the standard settings you'd expect to see from a mic preamp. It does have the works however, with knobs for setting both your input and output levels, and buttons for phase, phantom power, a -20 db pad, and for choosing between either mic or line input. A manual isn't something that is necessary with the MP1-A.

The sound quality of the Old School Audio MP1-A is very good. It isn't up there with the best sounding mic preamps that I've used, 500 series or otherwise, but it still sounds very full and clean. I don't know that anything can be inferred from the name 'Old School Audio,' as I wouldn't really classify this as a vintage sounding mic preamp. I've used it for recording electric guitar overdubs on a few different tracks, but my work with it stops there as I've yet to do much work in the room in the studio where I work that has this. I like that you have control over both your input and output levels, as this isn't something you will see on most mic preamps. It's also nice to have the full works in terms of options, as it is pretty flexible in terms of what it is able to take on.

While I wouldn't use the Old School Audio MP1-A over something like an API 512 or a Brent Averill 312, if speaking of 500 series modules, it's still definitely a piece of gear worth looking at for those who do have a 500 series rack. The price definitely makes it an attractive option for anyone with a 500 series rack trying to get some new colors in there, but I wouldn't consider this a replacement for the typical, aforementioned modules. Depending on what kind of studio you have, the MP1-A might be a great fit for you, but it's best when had in addition rather in place to give you another color...
Did you find this review helpful?yesno
»