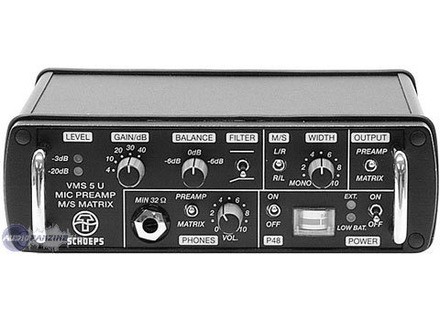 Schoeps VMS 5
5
The Schoeps VMS 5 is a unique microphone preamplifier, with a number of awesome features that I haven't seen anywhere else. The mic pre is made up of analog parts, and has XLR connections in the back, as well as a 1/4" jack in the front for headphones. It is the size of about half of a rack space, but the one that I used wasn't racked up in a traditional rack space.

The make up of the Schoeps VMS 5 is a bit more complicated than most mic pres out there, but those with a little bit of experience with preamplifiers in general should be able to figure out how to use it quickly anyway. In terms of parameters, the VMS 5 has knobs for gain and balance, a switch for a high pass filter, phantom power, and choice between either a preamp or matrix output. While it did take me a little bit to get used to these unique parameters, it isn't anything all that complicated once you sit down and figure it all out.

The sound of the Schoeps VMS 5 is overall extremely clean sounding. It does have its own type of sound for sure, but it won't color your sound in a way where it is taking away rather than adding in my opinion. In general I can't say it colors it at all where it is unnatural, but it does have its own sound. I have only used the preamp for recording acoustic guitar, so unfortunately I can't compare applications yet, but for this situation the preamp sounded beautiful as in tandem with the Neumann U87 mic I used, I got an extremely clear and brilliant sounding portrayal of the acoustic guitar...

I haven't seen any other Schoeps VMS 5 around other than that one that I used a single time, but I do think that you'd be able to get one easily if you wanted. The price is incredibly pricey, but Schoeps is a high class brand that produces nothing less than stellar microphones and microphones preamplifiers. I'd only recommend this for a professional engineer or studio owner because of the price, but would highly recommend anyone checking it out who had access to one.