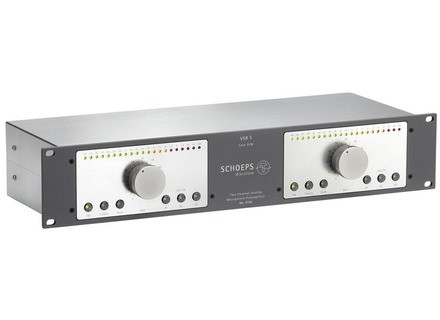 Schoeps VSR 5
5
The Schoeps VSR 5 is an analog dual channel microphone preamplifier to be used in the recording studio. While mostly known for making microphones, Schoeps also has a pretty impressive line of microphone preamps that can be used with any microphones but for the best compatibility I would try out a Schoeps microphone through this. This is also a relatively new product, so I would imagine that it will take a little while for this to circulate around. As far as characteristics go, the mic peramp has the same make up for both of the channels, although I'm not clear on what the connections in the back are since the one that I used was already racked up and I had no need to check out what was back there. However, you've got to assume that it at least has XLR connections since it is a mic preamp. It is in rack mountable form and will take up two spaces in a traditional rack casing.

While certainly quite expensive, the Schoeps VSR 5 is a top tier microphone preamp that is designed for professionals and those looking for high quality sound regardless of what it will cost. There are definitley better bang for your buck deals out there, so don't look for one here, but if you can afford something like this I'd highly encourage you to do some thorough research to see what will work best for you. However, I really don't think you could go wrong with the Schoeps VSR 5 if you can afford it...