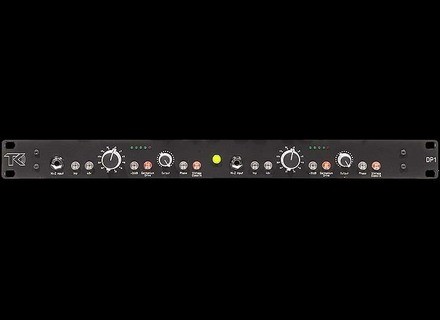 Chris.p.l's review (This content has been automatically translated from French)" Attractive price"

TK Audio DP1
4
Two-channel analog preamp transistors, connectors and XLR in / out and instrument input jack 6.35 mm. a switch allows a drive through a circuit "germanium" and another by a circuit switch vintage class-A "

I got into testing for a week and I've tested on voice, acoustic guitar, electric guitar, bass DI / mic and snare.

This preamp features a wide range of sound through the various positions that offer, the gain is huge (80db) and it seems robust. The 5-LED VU meter did not seem very accurate.

Personally I did not get more on the voice (mic V47, U87, TLM193), despite a nearly infinite possibility of sound color it shows in every shot sound a little metallic and very busy in the low / med I describe as "false heat" because rather than the low / med is put forward, we are left with a veil that makes this part of the spectrum as desired imprecise and very difficult to put in a mix. Once the button is pressed it Class-A amplifies the fuzzy side. On the key vote "Germanium" does not do much except if a desired effect and drive.

Acoustic guitar found on the same drawbacks as a voice.

On electric guitar (mic sm57 and V47) key "Germanium" seemed appropriate to soften up a bit and the low on the harmonic Same as in DI in microphone jack.

And finally, on snare (sm57 mic and M3500) I really like the preamp "flat" with an input gain trim and pushed output to a minimum.

In conclusion I found the price very correct for a quality stereo preamp correct.
I have, cons, was a bit disappointed, because on paper it might seem to a preamp to do anything given the number of adjustment possibilities it offers, but in reality it is not so versatile and low / med is not precise enough to compare it to other high-end preamp.